The lack of Thanksgiving movies and TV specials is, in my opinion, one of the greatest faults of the human race, and I don’t think that’s dramatic of me to say. Okay, well, it is, but it’s still how I feel. Thanksgiving is my favorite holiday, and I think it deserves more representation than it gets. One show who apparently shares my feelings is Bob’s Burgers, who, in its twelve seasons has nine Thanksgiving specials and one more on the way–it comes out on November 21, so be on the lookout. Bob’s Burgers is, coincidentally, also one of my favorite shows, so it only made sense that I ranked all nine of their Thanksgiving specials for you from worst to best to watch during Thanksgiving break. So, without further ado, I present to you the OFFICIAL unofficial rankings of the Bob’s Burgers Thanksgiving episodes. As told by me, a devout Bob’s Burgers fan.

Starting with the worst….

I have to be honest, I REALLY hate this episode. I know they say hate is a strong word, but in this scenario, it’s both strong AND accurate of how I’m feeling. First of all, it doesn’t take place on Thanksgiving Day–it takes place a few days before, when the school puts on Tina’s holiday-themed play about “quirky turkeys.” How can I feel the Thanksgiving spirit if the episode doesn’t even include Thanksgiving day? Anyways, Louise hijacks the play to get it shut down early so she can enjoy her long weekend, resulting in the audience getting sprayed with turkey guts. It’s pretty nasty, and it does not put me in the Thanksgiving spirit AT ALL. That being said, it does have some redeeming qualities–it features Mr. Frond, for starters. It also has a few original songs, which aren’t my favorites, but they’re not bad. Overall, though, this is an episode I’d rather skip. 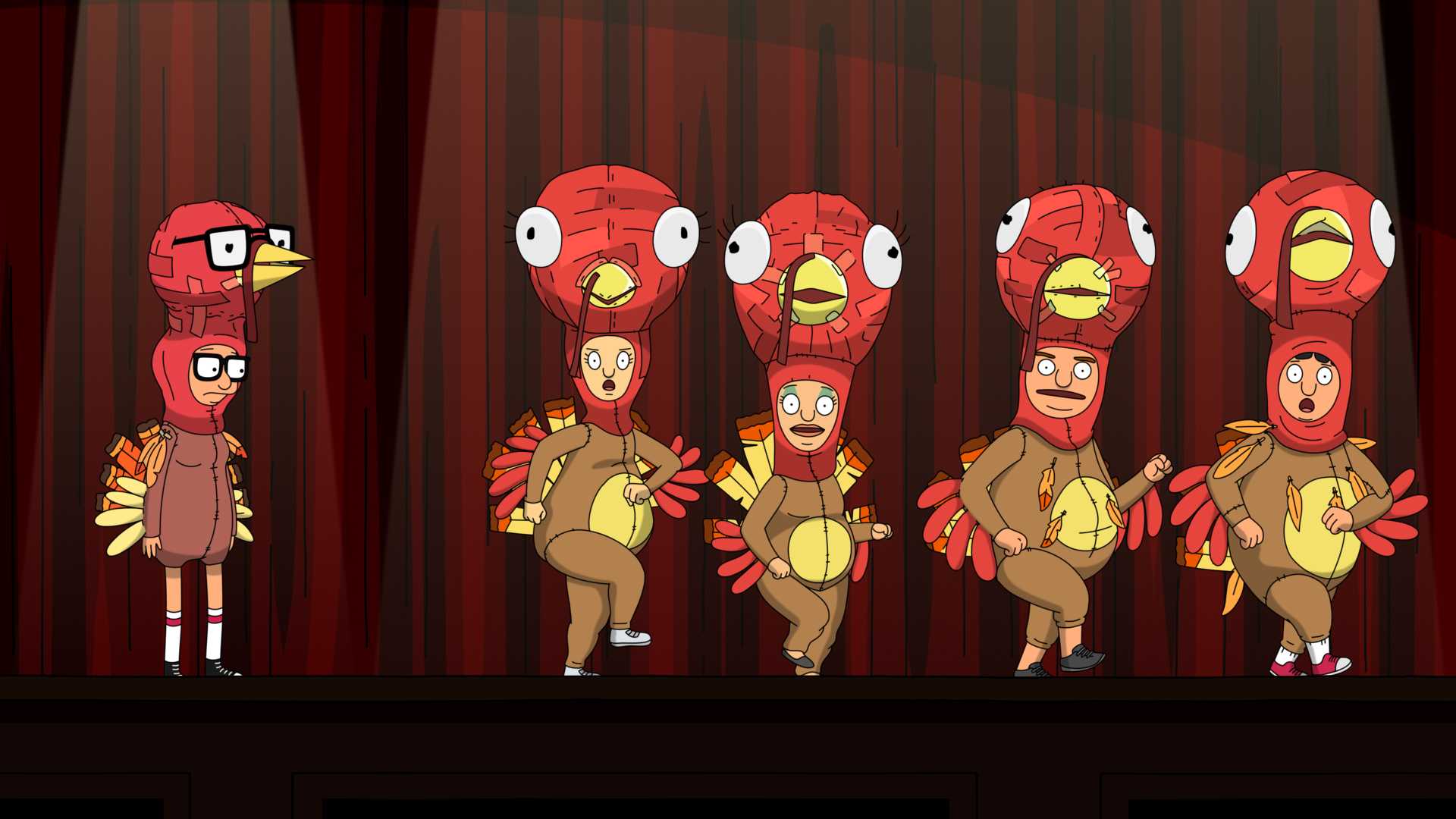 BOB’S BURGERS: The Belcher kids work on their own version of the school’s Thanksgiving play in the “The Quirkducers” episode of BOB’S BURGERS © 2016 TCFFC ALL RIGHTS RESERVED. CR: FOX

Number 8: Diarrhea of a Poopy Kid

You can probably tell just by the title why this episode ranks so low. In this episode, Gene gets the stomach flu on Thanksgiving, and the family tells him stories to help cheer him up. There are three mini-stories based on action movies told throughout the episode by Louise, Tina, and Bob. I personally think this style of episode is a bit repetitive, and dare I say–boring. So I didn’t love this episode very much. Plus, it’s very graphic–let’s just say there’s a lot of “bathroom sounds,” which is the last thing I want to hear when I’m thinking about Thanksgiving dinner. I’d say it’s a bit less gross than The Quirk-ducers, but still too much for those of us with weak stomachs. 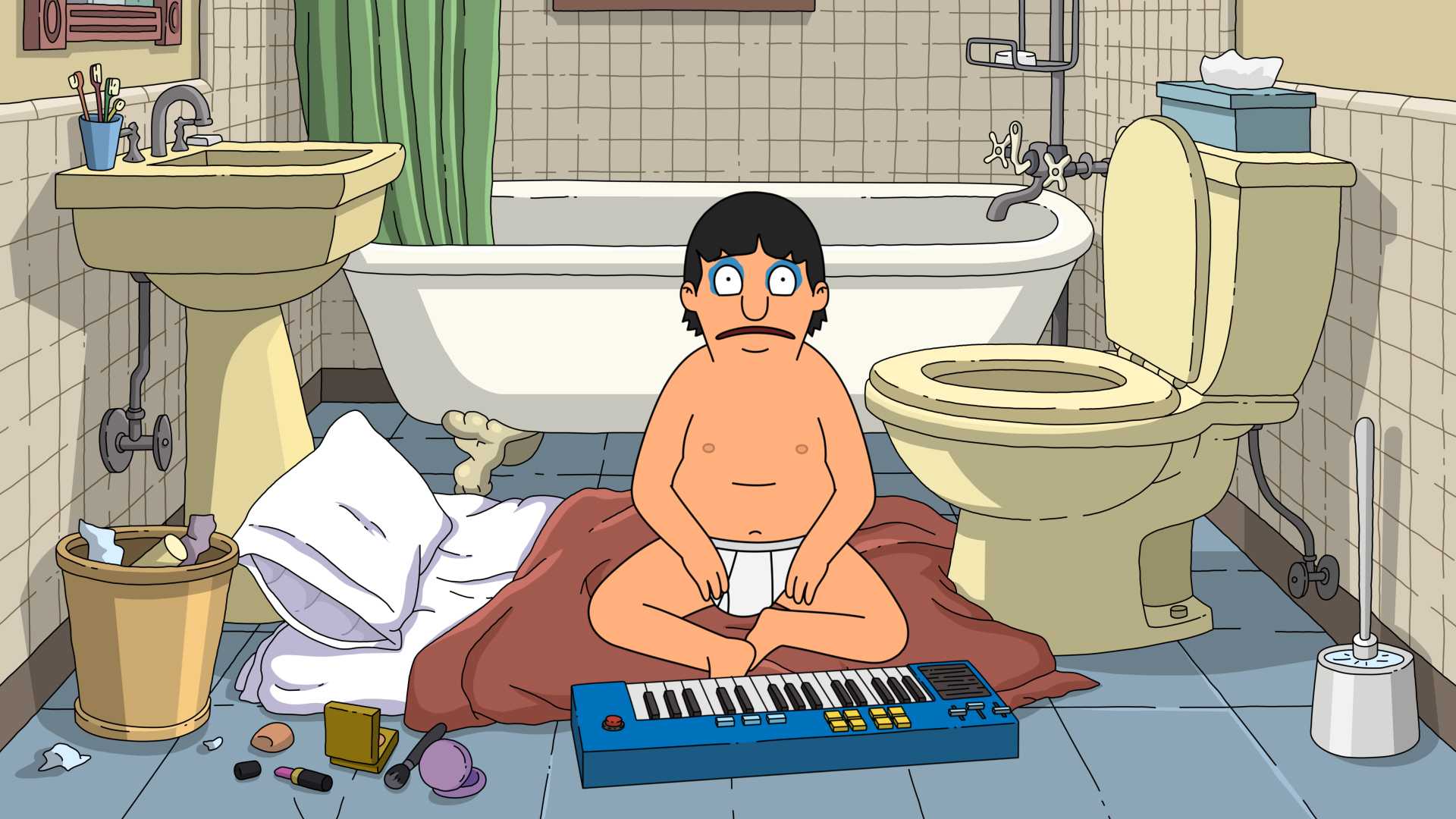 BOB’S BURGERS: When Gene can’t eat Thanksgiving dinner because of a stomach flu, the family tries to cheer him up in the, Thanksgiving-themed “Diarrhea of a Poopy Kid” special episode of BOB’S BURGERS © 2020 by Twentieth Century Fox Film Corporation.

Number 7: Dawn of the Peck

This episode comes from Season 5, and is the third Thanksgiving episode of the series. Linda and the kids try to escape Wonder Wharf after they’ve been locked inside with 500 angry turkeys (and other assorted birds) while Bob stays home, boycotting the holiday. Mickey, Teddy, and Regular Sized Rudy all make an appearance, and Linda becomes the Alpha Turkey. The episode features the Donna Summer song, Dim All the Lights, in lieu of a Bob’s Burgers original. Although I do love this episode, it definitely doesn’t give cozy Thanksgiving vibes, or Thanksgiving vibes at all, really–more like a scary movie spoof. So even though this is a 10/10 episode, it’s not the Thanksgiving episode I was hoping for.

(Side note: take a drink of water every time I say the word “Thanksgiving” in this article). 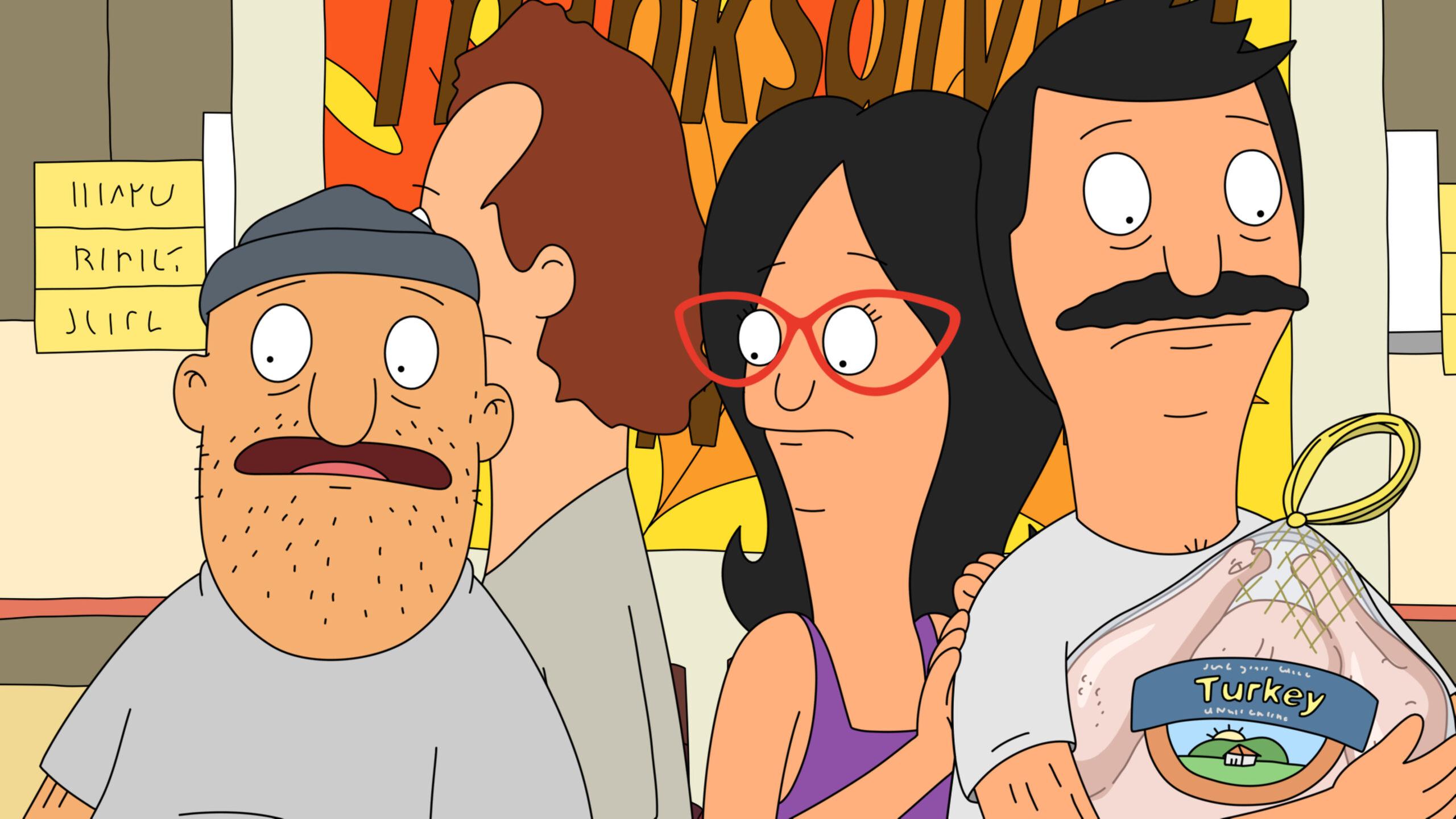 Number 6: I Bob Your Pardon

In this special, which is a part of Season 9, The Belchers try to save a turkey who is supposed to be sent to a slaughterhouse on the day before Thanksgiving. Besides the Belcher clan, this episode also features some new characters–the Mayor’s Aid, his assistant, and a reporter. I personally would prefer to watch an episode full of characters I already know and love, like Gayle or Teddy, which put this episode further down on my “Want to Watch” list. However, it does have a happy ending–or happy-ish? I’d say all in all, this episode is pretty average. It’s not a bad episode, but not very memorable. 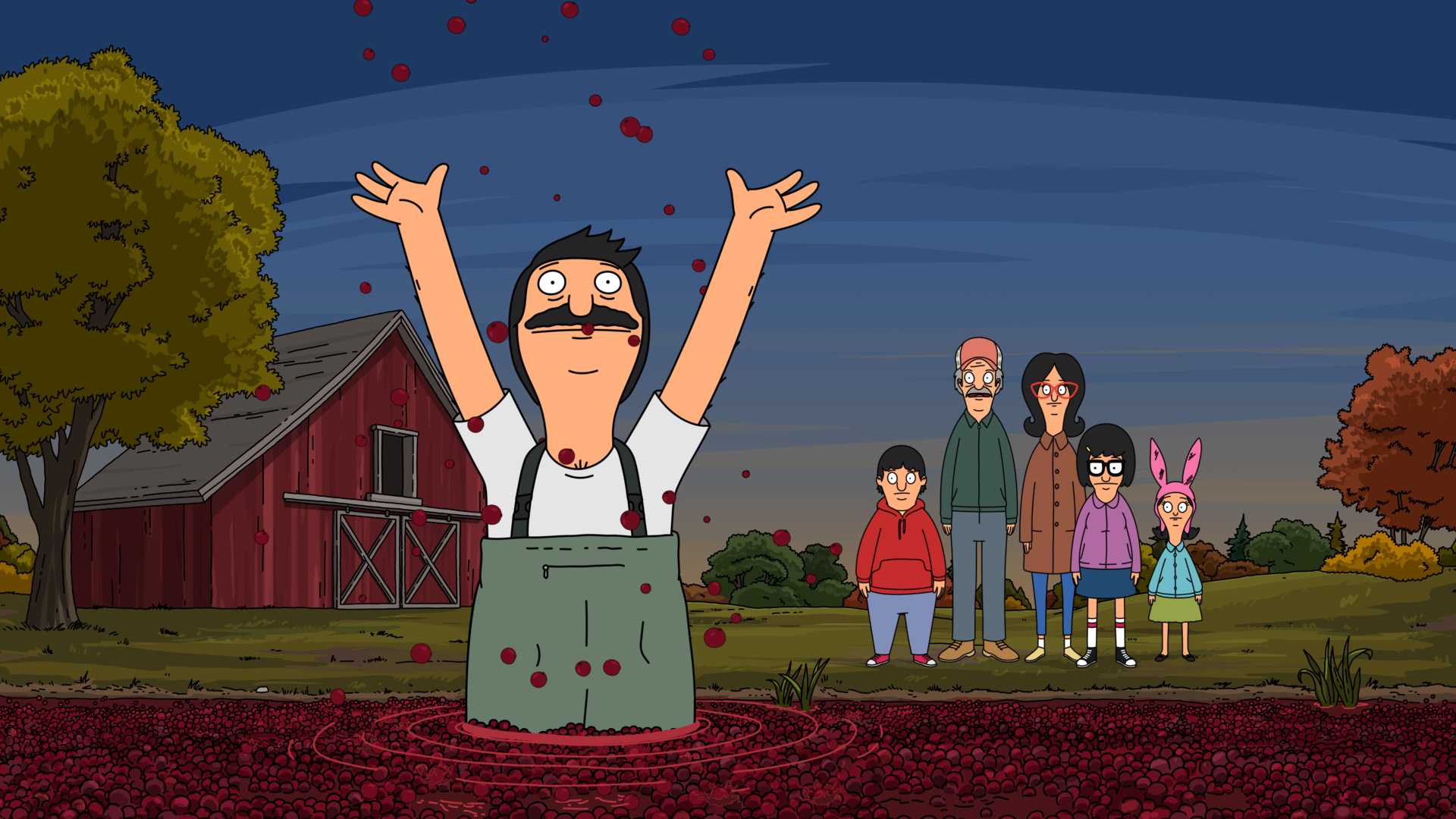 BOB’S BURGERS: The Belchers set out to save a turkey from a trip to the slaughterhouse in the “I Bob Your Pardon” © 2018 TCFFC ALL RIGHTS RESERVED. CR: FOX

In this episode, the Belchers go to Teddy’s to help him prepare for Thanksgiving with his family and discover he is a hoarder. Linda and the kids help him declutter, and the kids have a competition to find the best item in Teddy’s “trash.” Having Teddy in an episode is always a plus in my book, and the Belchers celebrate Thanksgiving twice–twice as nice! The episode is a kind of happy-sad, as it delves into Teddy’s childhood and why he has trouble letting go of “junk,” but with a happy ending that makes me feel warm inside, you know? 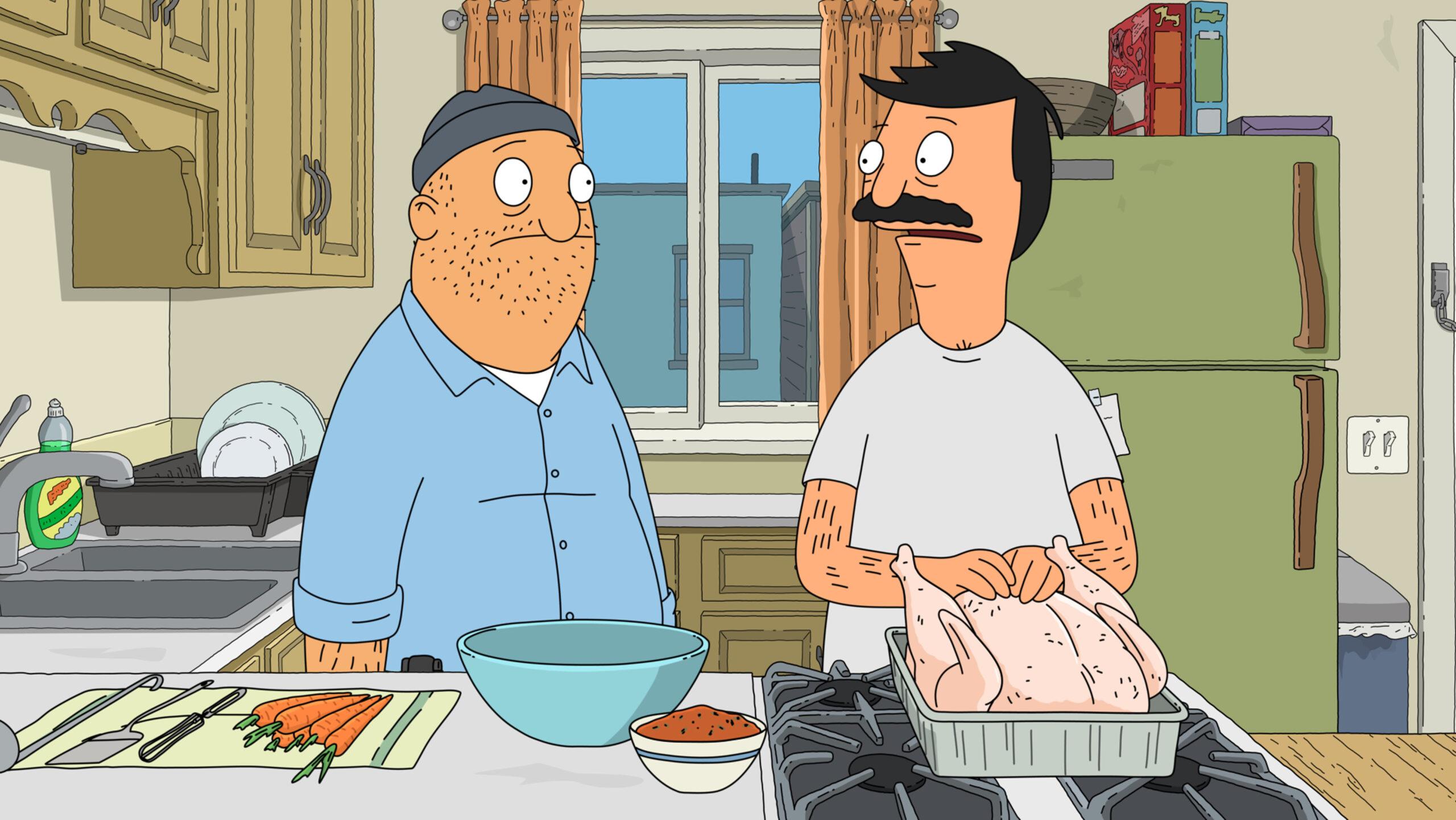 BOB’S BURGERS: When Teddy’s family unexpectedly announces that they’re coming for Thanksgiving, the Belchers reluctantly agree to pitch in, in the “Thanks-hoarding” episode of BOB’S BURGERS © 2017 TCFFC ALL RIGHTS RESERVED. CR: FOX

In the eighth Bob’s Burgers Thanksgiving special, Bob finally gets an extra special heritage turkey after being on a waitlist for five years. But, when the gas goes out across the block he has to figure out a new way to cook it. By the end of the episode, everything that could have gone wrong does, and the turkey ends up charred–sounds like a typical Bob’s Burgers less-than-happy ending. What’s special about this special, though, is that it turns out the rest of the turkey underneath the charred outer layer turns out to be delicious, and the family ends up with a Thanksgiving dinner after all. This special has some of the best parts of a Bob’s Burgers episode: Bob goes just a *little* bit crazy, Tina does something awesome and selfless (I won’t spoil it), and, best of all, Bob gives a personality to another turkey, like he likes to do in the kitchen. And like I mentioned, it also features a surprise happy ending, which isn’t always the case for the Belchers. Overall this episode just gives me the happies. 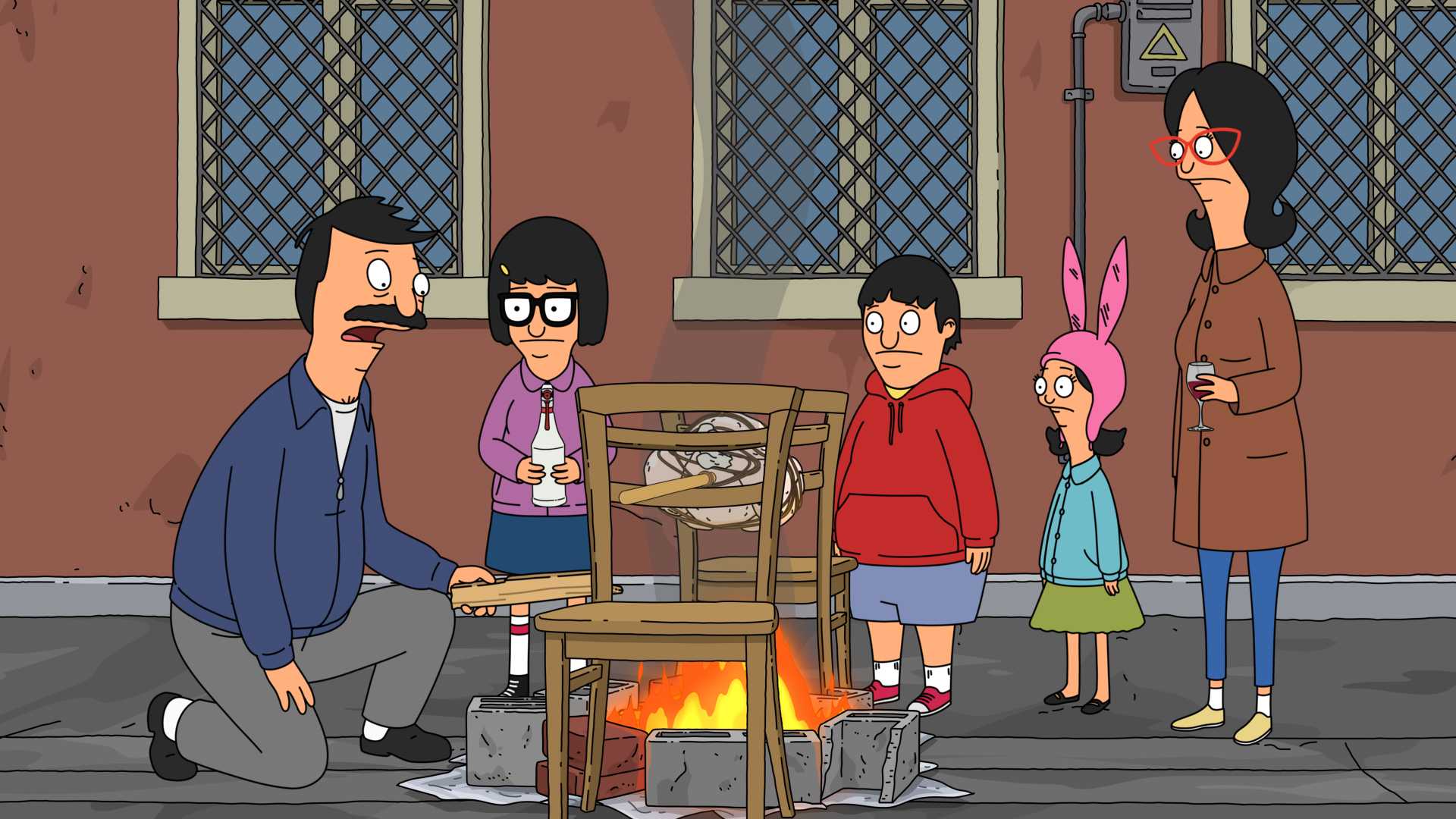 BOB’S BURGERS: Bob is determined to do whatever it takes to cook a rare, heritage turkey after the gas goes out on Thanksgiving in the “Now We’re Not Cooking With Gas” special Thanksgiving episode of BOB’S BURGERS © 2019 TCFFC ALL RIGHTS RESERVED. CR: FOX

This episode feels like a cross between Thanksgiving and Christmas, with Linda and the kids home cooking, and Bob and Gayle outside in a snowstorm. Although I normally love Gayle, she is mildly infuriating in this episode, which at first made me think this was not the episode for me. However, she makes up for it in the end by pulling Bob in a kiddie pool through the snow. And if you ask me, that’s a pretty accurate representation of how much family can annoy you, and how you love them anyways–which is Thanksgiving in a nutshell, right? Besides that, Linda even sings a few lines of an iconic Thanksgiving song, which can be listened to in full on the Bob’s Burgers Music Album (you can listen on Spotify or Apple Music!). And as a bonus, she even shares a new cuss word she made up with the kids that you can break out at Thanksgiving dinner with the family: aw, finky! All that being said, I had no choice but to rank this episode so high on my list. 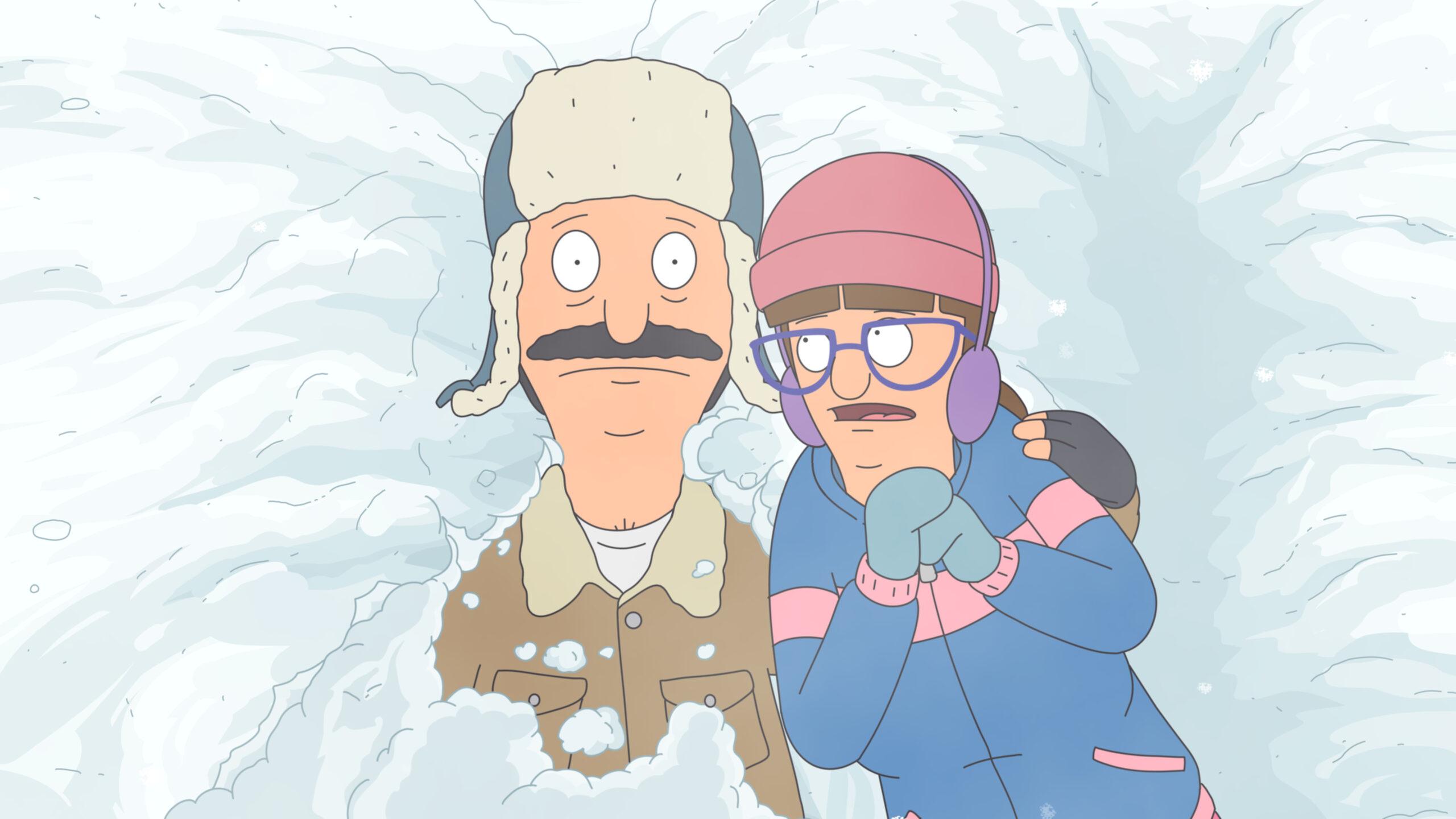 Number Two: Turkey in a Can

It’s a murder mystery! In the days leading up to Thanksgiving, someone is trying to ruin the holiday by putting the turkey in the toilet. This episode definitely gets credit for being original–complete with a plot twist at the end. It also features Gayle, Teddy, and Mort, plus an employee at the deli who gets Bob to admit he’s not 100% straight. So, yeah, a pretty good episode. And it even has a musical number! However, it is definitely a little bit gross. I mean, they put the turkey in the toilet. Definitely not safe to watch before eating on Thanksgiving Day, but the rest of the episode is so entertaining and heartwarming that I decided it had to go towards the top of the list anyways. 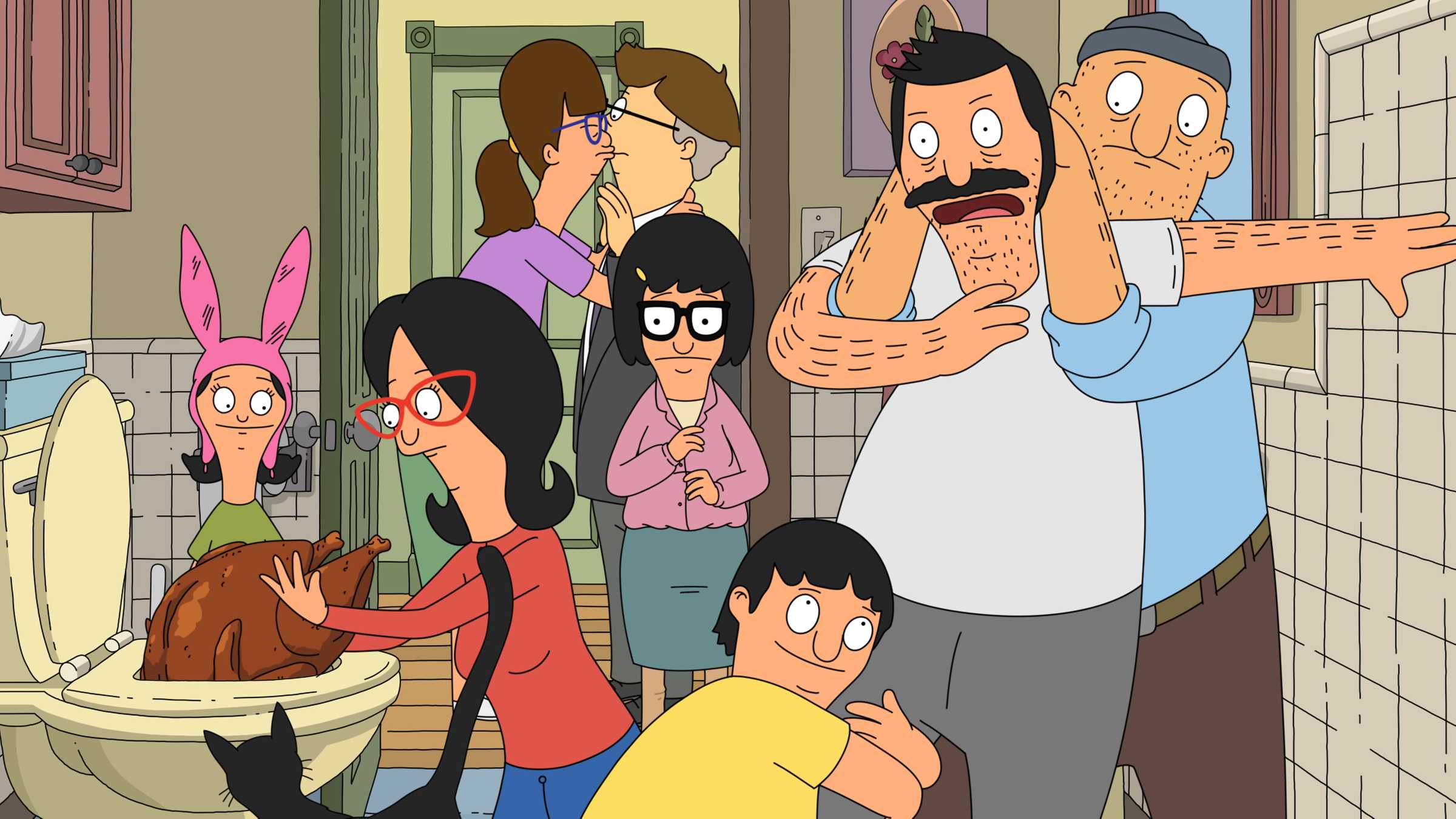 BOB’S BURGERS: Determined to have a perfect Thanksgiving, Bob meticulously prepares the family turkey. Then, to his horror, he finds that someone then dumps the turkey in the toilet in an act of Thanksgiving sabotage iin the all-new “Turkey in a Can” episode of BOB’S BURGERS © 2013 TCFFC ALL RIGHTS RESERVED.

Number One: An Indecent Thanksgiving Proposal

It’s only fitting that the best Thanksgiving special is the first Thanksgiving special. Here, the Belchers spend Thanksgiving at Mr. Fischoeder’s while he tries to make his ex, Shelby, jealous. It features a catchy song sung by Linda and becomes very entertaining when Bob gets drunk on absinthe and begins to hallucinate. Admittedly, the plot-line is a bit overused in this show, with the Belchers doing Mr. F a favor in order to score free rent. Also, the rest of the family ignores Bob’s Thanksgiving festivities, which takes away from the cozy feeling I was looking for in this episode, the kind of feeling that reminds you of family and good food. However, this coziness returns at the end when Linda and the kids apologize to Bob, giving this episode a high score overall. It’s the kind of episode I’d watch again and again–and especially on Thanksgiving. Bonus points for Lance the Turkey, who Bob gives a personality in his drunken state. 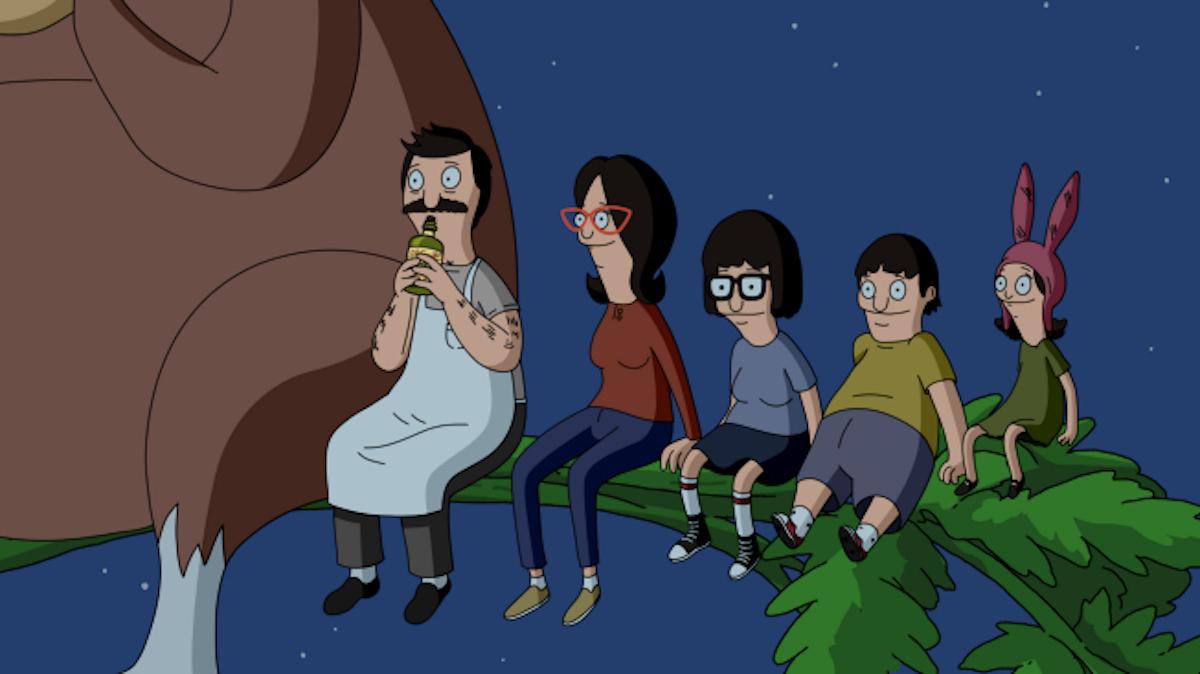 And that concludes the list! At least, for now. The jury is still out on the upcoming special for 2021–Stuck in the Kitchen With You. So until then, I will be watching and re-watching some of my favorite Thanksgiving episodes from the series and dreaming of mashed potatoes. All are welcome to join.

How can you Start Going out with a Girl?