Name a Christmas movie. Maybe you think of “The Grinch” with Jim Carrey (my personal favorite) or “The Santa Claus” or “Rudolph the Red Nosed Reindeer.”

Now name a Halloween movie. Maybe the classic “Nightmare Before Christmas” or the nostalgic “Halloweentown” comes to mind.

Okay just one more I swear: name an Easter movie. Maybe you remember being forced to watch “The Passion” years ago or maybe you look back at “Hop,” the movie that got the song “I Want Candy” stuck in your head as a child.

But when discussing “Thanksgiving movies” as one does around this time of year, only good ole “A Charlie Brown Thanksgiving” gets brought up.

The film is no doubt nostalgic, heartwarming and entertaining, but Thanksgiving deserves more recognition than just a 30-minute video.

The delicious food, days off school or work, extra time with family (for the lucky ones who don’t suffer through political arguments at the dinner table), and delicious food (cannot emphasize the food enough) makes the agonizing wait from bleak, cold November to Thanksgiving’s more celebrated sibling, Christmas, worth it.

With this, there should obviously be more than one movie representing the beloved holiday that causes the welcomed pre-Christmas break weight gain. (And I’m talking about legitimate movies, no Hallmark lovey-dovey films. No hate to Hallmark though, most of its movies, while cringey, are adorable.)

No need to thank me, but I will now end your search for an entertaining film to watch during this time between spooky season and “the most wonderful time of the year.”

(If you have already seen this, just know you are cultured and I very much respect you. Give yourself a round of applause.) 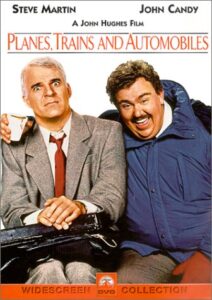 The film was directed by John Hughes and debuted on November 25, 1987, which also happens to be the same date as Thanksgiving this year. (It is always on a Thursday, just to remind some of you, and myself.)

There will be some spoilers in this review, however I will end it on a cliffhanger, forcing you to watch the movie in its entirety. It also earned a 92% on Rotten Tomatoes if that gives it any street cred.

The movie follows uptight marketing executive Neal Page (John Candy) from New York as he TRIES to travel back to Chicago to see his family for Thanksgiving.

He first misses his cab to the airport, the first of many mishaps on his journey. When he finally gets to the airport, Neal meets quirky shower-curtain-ring salesman (a thrilling job I imagine) Del Griffin (Steve Martin), who tries brightening up his spirits to no avail while he waits for the same flight back to Chicago. They do successfully board the plane, but are soon diverted to Kansas due to heavy snowfall.

This concludes the “Plane” section of the film.

Hotel vacancies were limited in Kansas during the holiday weekend. Where’s Dorothy’s ruby slippers when you need them?

So, Del and Neal work together to find a hotel. When they finally find a place to call it a night, there is only one bed, and arguing ensues. Neal is especially not pleased (a constant theme during the hour-and-a-half film).

The next day, after Neal becomes fed up (what’s new) with Del’s happy-go-lucky personality, the two hitch a ride to a nearby city to take a train home. During the ride, the train breaks down. Man, do they have bad luck.

This ends the “Train” part of the movie.

Neal and Del move onto the automobile section of their trek and take a bus to St. Louis. Neal is completely sick of Del by this point and gets away from him. However, when Del finds a car he can use to get home and Neal doesn’t have any means of transportation, Neal comes crawling back. Like they all do.

Will this be the end of the “Automobiles” saga?

Will the two ever make it home safe and sound for Thanksgiving? Will Neal and Del ever see eachother again after their tiring trip?

My laptop keys will type no more. Guess you’ll have to see for yourself 🙂