Written by Rachel Liggett on December 5, 2022 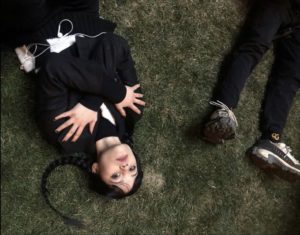 Wednesday is a 2022 Netflix show inspired by Charles Addams’ character Wednesday Addams; an iconic character that gained popularity from the Addams Family films along with the television sitcom. The series has been receiving mixed reviews online. While lots of people are raving about the show, some critics are saying the show ruined Wednesday and the reputation of the Addams family. Tim Burton, who created the Addams Family, worked as an executive producer on the show, and casted Jenna Ortega to be the lead who he believed to be the perfect fit.

Although the show reads like a stereotypical teen drama, it is still fun, nonetheless. As a viewer who knew little of the Addams Family to begin with, I am not upset with the modernized direction they took Wednesday’s character, nor the plot of the show. The show tackled some dark themes while simultaneously finding a balance between black humor and regular comedy. Ortega did a masterful job embodying Wednesday Addams— to say she committed to the role is an understatement. Ortega has said in several interviews that she tried to blink as little as possible to capture Wednesday’s “cartoony” feel, along with taking cello lessons since her character was great at playing cello, she also went as far as to learn archery despite it not being integral to her character, and she also took fencing lessons to properly personify Wednesday. It is refreshing to see a young woman devote so much energy to her role.

Ortega also fit Wednesday’s role in another area— Ortega is a Latina woman. Casting a Latina woman is huge for the Latinx community who are still heavily underrepresented on television outside of being a ‘bit’ character. Ortega actually said in an interview with Shondaland that she is glad that Wednesday’s heritage was not heavily focused on in the show, as she feels that it would just take away from the plot. Representation should feel authentic, not forced.

The show worked closely with Tim Burton, who has a racist past. He has undermined many minorities over the course of his career and said things that he probably… shouldn’t. The touches of racism that were addressed in the series were not coming from Burton, however; the series addressed racism in a tasteful way where it did not make excuses for previous acts of racism.

At the end of the day, Wednesday was not a masterpiece, but I thoroughly enjoyed watching the series. I think it was a fantastic take on what a modern Wednesday would be like, and the cast was full of diverse, likeable characters. The series also had many twists that I did not expect. I am typically against second seasons, but Wednesday left the ending open: I would not be disappointed if it got another season. In fact, I hope it does. As of November 23, Wednesday is available to stream on Netflix, click the trailer below for a preview!