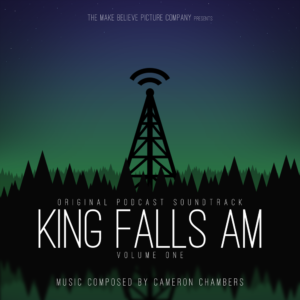 King Falls AM is a supernatural fiction audio drama created by Kyle Brown and Eric Kimelton. Unfortunately, the podcast is no longer running— but it ran bimonthly from 2015-2019 where it accumulated over 100 episodes, and it reigned in a large audience from all around the world. Aside from that, it also was prevalent in Tumblr culture for a period of time. At first, people flocked to King Falls AM due to its short runtime (the episodes were only 10 minutes long— perfect for a morning trip on the way to work!), but eventually the podcast began to stray away from that format… yet listeners stayed due to the fascinating narrative.

The story’s premise is quite simple… in the town of King Falls, a new radio host, Sammy Stevens, joins the AM shift— but that’s when strange and unusual events start occurring. The town has always been obscure… but this is different. While Ben Arnold (the other host) and Sammy Stevens discuss mundane topics, more strange occurrences happen during their broadcasts. In the podcast’s early episodes, the eeriness was simple— the Loch Ness monster, a ghost of a former president, etc. As the story progresses, however, this supernatural activity becomes more… sinister.

As I stated previously, the podcast does begin to lengthen as the story proceeds, and the episodes move from ten minutes to around thirty… this is a large progression if you have a poor attention span, like me. However, the shift is incredibly natural and there are very few dull moments… so it’s hard to get bored.

A lot of people look to podcasts due to the inclusive environments some of these audio dramas can create… and King Falls AM is no exception. This podcast consists of diverse characters with intricate relationships with one another, which is refreshing to see.

Although listening to podcasts is a lot different than viewing a television show, I believe that audio dramas are new and up incoming. Although podcasts have technically been around since 2003, it feels like more and more keep cropping up. In this day and age, podcasts are also more accessible than ever as they have a presence on almost every media platform like Apple Podcasts and Spotify, and audio dramas specifically are gaining popularity. The audience may feel that they can commit less to a podcast than a TV show, while they also do not have to give the podcast their full attention but can still understand the narrative. This is especially good for individuals who like to multitask.

On par with several other popular podcasts like The Bright Sessions, Welcome to Night Vale, and The Magnus Archives, I can officially refer King Falls AM to your list of potential listens.