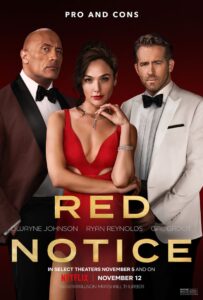 Red Notice is an action comedy, one that stars Dwayne Johnson as an FBI profiler, Ryan Renolds as an art thief, and Gal Gadot as the Bishop, an even more notorious criminal. The Rock and Ryan Renolds form an unlikely team and work together to retrieve Cleopatra’s three golden eggs before the Bishop does. Throughout the course of the film, the two men form a beautiful bond, one tested and put to the test as they traverse from Rome, to Bali, to Valencia, to Argentina, and to Paris. Loyalties change, Ed Sheeran makes an appearance, and Gal Gadot stuns in her role as evil seductress. Even though The Red Notice was hugely entertaining and fun, I also found it to be lackluster and dead, lacking whatever it is that makes movies feel real.

An important part of what made Red Notice enjoyable were the witty quips between the two male leads. Ryan Renold’s sarcastic dialogue made me giggle, especially since this was the first movie of his I have ever seen. The Rock is big, Ryan Renolds is not so big, and the contrast of their size on screen made their relationship even better. I’ve seen many reviews that view their humorous dialogue as lame, but lame things are funny, and I do think that was the point. But besides this silly dialogue, the acting itself wasn’t so good.

Despite my love for Gal Gadot in Wonder Woman and my reverence for her as a beautiful, powerful, female celebrity, sometimes her acting comes across as forced and dead. In Red Notice she plays an evil role, one of a woman obsessed with sabotage, and this could have been so perfect if Gal Gadot had a stronger presence, especially since she doesn’t usually take on these sort of roles. Instead, her casting felt a little out of place, as though the director just wanted someone beautiful as opposed to someone that made sense in the role.

In addition near the end of the movie, there’s this strange double-crossing, plot twist, unexpected relationship alliance that I absolutely hate and wish didn’t exist. I won’t say what happens, but it gives me the ick. Even though it makes the plot more unexpected, it makes it so corny and a little bit awful. I still love the cast, but the story was unbelievable and awkward. Yet, this didn’t make it entirely bad, because these factors did make it entertaining.

Overall, Red Notice is a super fun movie that got me out of a movie watching slump. I wouldn’t not recommend it, I just wouldn’t recommend it to film buffs that take everything they see so seriously that they can’t enjoy it. I love the Rock, but more importantly, I love Ed Sheeran, and his brief appearance is a small factor that makes this movie worth watching.