If you have logged on to Twitter or Facebook in the past few weeks, you have almost surely seen people talking about the show “You”.  It is one of the many Netflix shows that has received lots of hype solely from social media, similar to how “Birdbox” and “Bandersnatch” dominated timelines about a month ago.  As someone who is very into both crime and cheesy romance, I decided to hop on the bandwagon and watch “You”.  There are spoilers ahead, so proceed with caution if you have not finished the series!

The show follows the romance of a quiet bookstore manager, Joe, and a beautiful poetry student known as Beck.  Little does Beck know, every one of Joe’s moves is calculated based on information he gathered by stalking her.  He knows her likes, hobbies, friends, and the places she likes to go. As the show progresses, Joe’s behavior becomes more manic and it is clear that he will stop at nothing to win Beck’s heart and get rid of those who get in his way. 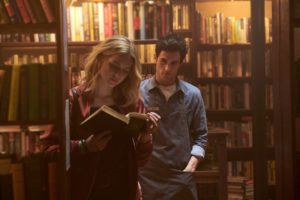 Joe and Beck, Photo via Vox

This show definitely delivered on the cheesy romance front.  This may be in part because it was produced by Lifetime and was only picked up by Netflix after filming was over.  Occasionally, the dialogue went into the territory of being unrealistically flowery and awkward.  It was as if older writers were trying to imagine how “the kids” would flirt and interact, while still trying to maintain the characters’ intelligence.  While part of this awkwardness could be to give Joe an extra edge of creepiness, it honestly seems like plain old bad writing. Despite this, “You” does a good job on fulfilling a more modern take on a romance show, depicting some of the struggles that come from dating in the age of social media.

One of the best parts of “You” is the constant irony of Joe envisioning himself as the perfect boyfriend.  He is perpetually comparing himself to other men in Beck’s life such as Benji, Beck’s douchey, on-again-off-again boyfriend.  All the while, Joe is doing things like sneaking into Beck’s home, stealing her underwear, following her around, and manipulating her into thinking he is just the guy she needs.  Oh, and he murders multiple people that she cares about. This irony is a great play and exaggeration on the entitlement of self proclaimed “good guys”.

Initially, Joe’s near misses make episodes more exciting and obviously keep the plot moving since he can’t be doing much stalking and murdering from inside a jail cell.  However, as the show goes on, his ability to escape suspicion gets tiring and repetitive. While it is clear that people are on to him, Joe makes it through the first season without ever being arrested.  One of the crimes that I found especially infuriating was Joe’s murder of Benji. Instead of making it look like Benji was killed, Joe disposed of the body and went on posting from Benji’s social media accounts to make it look as though he was still alive.  No matter how often Benji travels or disappears on benders, I find it hard to believe that no one would realize that a young, popular entrepreneur had not been seen in months. Additionally, it also doesn’t make sense that Joe, who supposedly has no social media accounts, is so good at impersonating people on social media.

Although I heard people giving the standard “Oh my gosh, wait until the last episode!”, I found the ending predictable.  It was pretty obvious that with Joe’s increasing manipulation and the mounting blood on his hands, he would have no problem murdering Beck.  Once she found out about all the things he’d been doing, there was no way that she would continue to love him.  So, his options were either murder or to lock her in his glass box forever.  The only redeeming plot twist is the return of Joe’s ex-girlfriend, Candace. Throughout the series, viewers were made to believe that Candace had likely been murdered by Joe. It will be interesting to see how producers use this plot in the next season coupled with the mounting suspicions around Joe from law enforcement and private investigators. 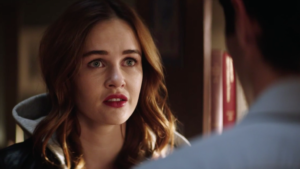 Although I was entertained by the unique irony of “You” and its take on modern romance, the predictability and plot holes ultimately left me unimpressed.  However, there’s a good chance that I will watch the next season, so it couldn’t have been that bad.