Imagine a girl who is a doctor. She is also an investigator. What if I told you she is a musician, too? She is no “domesticated animal”, but rather an “independent variable” who does not know what is “this of being a woman”, and is looking for the “recipe of herself.” Today, we are at the Rés-do-meu-Chão (My Ground Floor), waiting for her first album to arrive very soon.

Catarina Munhá is living proof that life takes us by surprise. Giving voice to our passions when we least expect it. She is a young Portuguese family doctor, does research in the medical field and has always been passionate about music. Recently, she decided to share her songs with the world and is now releasing her first album, Rés-do-meu-Chão (My Ground Floor). When asked about her musical references, Catarina confesses that is a difficult question, since she has heard every music genre. “I started by classical music and then I had jazz classes. After that, I played Irish music in a pub, and while doing that, I was listening to rock, pop and folk. I listened to many things simultaneously. At this time, my main references are a mix of indie, folk and some Brazilian musicians like Silva, Cícero or Clarice Falcão.

Betting on the music field was not a decision she made, but rather something that happened unexpectedly. “After many years studying medicine and having done the speciality medical exam, I decided it was time to stop, take a breath and think. I decided to take one year and do other things, without knowing exactly what those things were. I knew I wanted to do something related with research and get another job that had nothing to do with medicine, in order to gain some perspective and understand where I wanted to go next. By chance, even before I started that pause, a friend put me in touch with other musicians, showed them my songs and that led to a chain of occurrences that ended with Hélio (her manager) challenging me to record an album with Sonic Music”.

Currently, Catarina has three jobs. She still works, occasionally, as a family doctor and she collaborates with a research team of general and family medicine of NOVA Medical School, where she investigates which is the best way to teach doctors after they end their courses in college. Furthermore, she has been lecturing doctors on how to critically read medical literature without accepting everything that is given through the marketing industry, but rather focus on scientific evidence. In addition, she is working on her music. Managing all this work is something she is still discovering how to do. “Until now, it’s been possible to manage everything. I really like what I do. In medicine, I’m doing something more objective and systematic. With music, I have more liberty. One thing helps me rest from the other. Until now, it has been possible to do, but it isn’t easy to do all the time. Sometimes there is more de-imbalance, but I always try to rebalance it”.

Catarina is still discovering her work as a musician, since she still is not able to see it as work. In addition, her days are also occupied with investigation; therefore, she does not have a musical routine, yet. “There were moments when that was different. When I was recording my album at the studio, I was there for more than 12 hours, with thousands of buttons, and didn’t understand a thing. There were many people talking in what seemed a foreign language, but everyone was extremely inclusive and they helped me understand what I was doing”. About the concerts, it was something she was already used to do before, even though it was in a different context. Moreover, she has always played at home. Overall, she feels like she has much more free time since she quit her full-time job as a doctor. 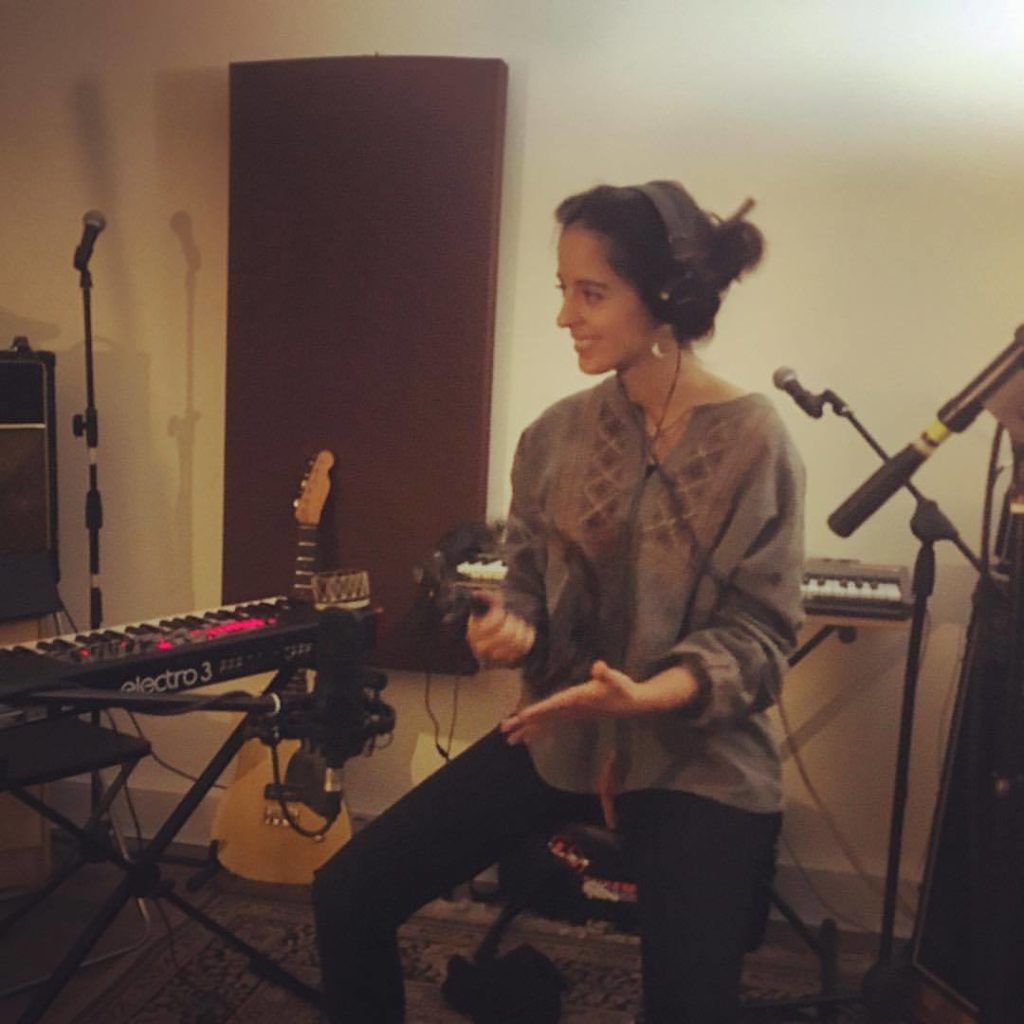 Catarina Munhá recording in the studio

About her songs, she explains that each one has a fictional component and other aspects that have to do with her experiences. “Sometimes, it is difficult to make a literal interpretation of the lyrics, because I was not talking directly to anyone”. Moreover, Catrina feels that her experience in medicine influences her when writing her songs. “It is extremely difficult to not be influenced when doing medicine. It requires a frequent interaction with different people. It is a continuous exercise of empathy. We are constantly putting ourselves in the place of the others, listening to different stories and emotions. I think that influences me, mostly when it comes to writing the lyrics and choosing the themes for the songs. I am definitely not the same person after practicing medicine”.

Everything started with the creation of a YouTube Channel where she posted videos of her songs, as a request from her friends. Now she is releasing her first studio album. When she started to compose its songs, she was also playing the ukulele for the first time, which influenced the outcome. “It gives it some tropical sonorities I was not expecting. I had played Celtic and Irish music, so it has also some folk. It has become something like a Portuguese tropical indie-folk. Musicians do not like to put labels in their work, but that also makes it difficult for people to understand what we are doing, so I try my best”.

The new album has the name Rés-do-meu-Chão (My Ground Floor) and it started with the idea of making one song for each division of a house. “However, I started to do more songs, so now it isn’t one song per room. It has songs related with the various rooms of a home and the different places within me”.

Through the YouTube Channel, we can listen to some of the songs that will make part of the album, so I asked Catarina to choose three songs and tell me the memories she had from each one. The first one chosen is called “Águas-furtadas” (Garret), in which she sings that having her feet on the ground is not enough. “It isn’t a song about the house. It’s about the fact that inside my head there is not a ground floor. The ground floor is the physical place where I am, but I spend more time within my head than in it. Our home is where we want it to be. I’m not attached to the physical part of an house. For me, a home is made by the people I like and by the moments in which I feel well. That is the attic, an anti-home, in a physical sense”.

The next song, called “Isto de Ser Mulher” (This of being a Woman) was a song she wrote after having a long discussion with a friend who was annoyed with discrimination based on gender differences. “I thought about it and when I got home, I wrote the whole song. Then, I thought that sometimes it’s hard to be a man, too. I like to think about the other side of the coin. Thus, I added a block about how difficult it is to have the obligation of masculinity, à posteriori”.

Finally, the last song Catarina wanted to recall was “Canção-Receita” (Recipe-Song), which was the first song she made about the house. “I was cooking with a friend and we were dealing with various ingredients. Then, I remembered I could do a song playing with the kitchen ingredients and so I did. I did a Recipe-Song that is not about gastronomy, but rather a recipe of a person”.

Shortly, she will present more YouTube videos, since they are recording video clips for the songs of the album. “This time the videos won’t be recorded with a phone at home. Anyway, I would like to keep these old videos there, even though they were recorded on the phone. I think it is good to know the beginning of stories. I always have the sensation that many times, even in social media, we only see the good things or even the final product. That can be demoralizing, since we don’t have access to the beginnings and the obstacles that happen in every course”. 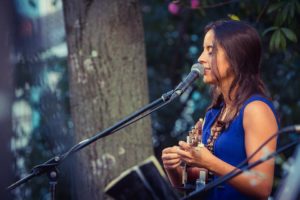 Catarina is a girl who has trouble defining herself and who values the abstract. She is not a fan of routines and does not limit herself to being one thing. You can easily hear her sweet voice accompanied by a ukulele, piano, guitar, synthesizer, violin or even the tambourine. Moreover, she has the ability of composing simple melodies and meaningful song lyrics in nothing more than five minutes. Practice makes perfection, so it is said.

Nevertheless, the way Catarina writes is unique. See has a relaxed and personal way of expressing messages, a one that easily makes you dream and reflect about the surrounding world without being consumed by a turbulent chain of thoughts. If you ever had someone say that you cannot do something, or that combining some areas in your professional life is impossible, follow Catarina’s example. If there is passion and will, you can definitely dream and maybe someday someone will listen. First, Catarina took her songs from her drawer to a YouTube Channel, and then she was recognized, taking her songs from the YouTube and housing them in an album. Perhaps, Catarina has a very good point when she says that writing song lyrics is like “talking to someone who is not here”.