Youngstown band, Eath 9th, just released their latest single ‘Theodora’ Saturday, April 21st. The single is packed with some killer vocals and impressive guitar riffs. This single comes as the first release from the band’s upcoming album, which is going to be released sometime soon (we can’t tell you when, but it’s soon and you should be pumped). I had the absolute privilege of having the band (Minus drummer Tyler) on my radio show to hear them perform live, and I was very impressed.

1.What inspired the track ‘Theodora’

Where to begin? Musically, there are a number of inspirations. We were really exploring a darker, more ominous sound, and this was the first song to come out of that. Lyrically, it can be debated what the song is about. I would recommend giving it a listen and seeing what you think. What I can say, is that Theodora is strong, independent, and doesn’t need any man. She knows what she wants, and she knows how to get it.

2.Tell me a little about writing process for the song.

Sometime last summer, I was sitting outside and was pretty much blindsided by a riff in my head. I sang it into my phone to come back to later. The next day I threw a small demo together and brought it to the guys. We ran with it from a musical standpoint, but I had zero clue what the lyrics would be. A few days later, I remember asking my fiance, Jackie, and her mom, “Theodora is a name, right?” to which they both looked at me and were like “umm yeah…Theodora Richards is Keith Richards’ daughter,” and then I started running with it. I needed a name that would slant rhyme with “Ignore her.” Lyrics came easy at first, but as it went on, wanting to make each verse live up to the last, it got difficult. That’s when Jackie, who knows more words than me and likes to read, stepped in and helped me finish the lyrics. She’s the real MVP.

Once the lyrics were set, the rest of the song really came to life at our next couple practices. Steve added his signature style to add depth to the guitar parts. 20 and Tyler were, well, 20 and Tyler, a solid and handsome rhythm section, so it all came together quite swimmingly. We played it out a few times and people were into it. It’s an awesome feeling to get positive feedback on new music that you put a lot of work into.

We hit the studio with our friend James, of the band Spirit of the Bear, to record the single at Capital University. James had some awesome ideas to make the song sound exactly how we envisioned it. We were all really happy with how it turned out and hopefully everyone else is too.

3. Any touring planned for the summer?

We don’t have any touring plans, but there will be a lot going on. There are several shows in the works. We’re planning to hit Youngstown, Pittsburgh, Akron, and hopefully Cleveland. We also have some recording to do throughout the summer, so yeah, we’ll be busy.

4.What can fans expect from your upcoming album?

Hopefully, our best work yet. We are very excited about the new material. I feel as if we have reached the point where we have been together long enough that we all kind of know what the other is thinking and can really maximize each others’ outputs. This will be the first time that all the songs are written in succession and then overanalyzed, tweaked, and perfected before ever stepping foot in a studio.

5. What are you guys most excited about with your new music? 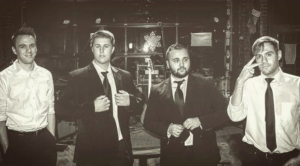 I would say we are most excited just to share it with everyone. We are pretty proud of what we’re doing, and we really hope that people enjoy it enough to go tell their friends about it. That’s how it grows and becomes more fun for everyone. If you’ve read this far, I’d like to personally invite you to a show. It’s going to be awesome, and it will be more awesome if you’re all there.

Do yourself a favor and check them out on social for more great music and upcoming tour information!