The media is fascinated by touring musicians. We cherish the creation of hit songs and chart-topping albums, but rarely is the climb to the top ever discussed with honesty.

One incredible story of triumph in the music world comes from our own backyard. Nicholas Sainato hails from the Youngstown area and is a graduate from Youngstown State University. You may recognize him from his current work with alternative pop act Nightly.

Being a successful touring musician didn’t happen overnight, however. For Sainato, his dream began in high school. He began his career in punk band Another Found Self. For six years, the band found astounding success for such a young group, performing at acclaimed venues like Cleveland’s House Of Blues.

Touring life became his career aspiration. “Ever since then I’ve been hooked, and just love performing live in front of people. I love writing and recording music as well, but there’s something about live music that has me hooked,” Sainato said.

When pursuing music, some make the choice to go to university, while others skip it entirely. Sainato spent one semester at Berklee College of Music in Boston. He soon realized that the school couldn’t give him the experiences or education he required for his personal goals.

Sainato then relocated across the country to Los Angeles, where dreams can come true. He joined The Strange Familiar, which may or may not sound familiar to you. In fact, this band was featured on America’s Got Talent and made it all the way to the top 48 acts!

After spending 2010 in the talent competition, he noted, “America’s Got Talent was cool for a sec but I would never do it again.”

All in all, The Strange Familiar discovered success beyond the network television show. The group released two full-length albums and had tracks featured on shows like The Vampire Diaries and Pretty Little Liars.

Even more impressively, Sainato completed his degree at YSU all while touring and recording with the band.

With an inevitable end in sight, Sainato started his own project with Youngstown’s female-led rock band The Vindys. This project is still wildly successful in the area, but Sainato still was still in search for musical fulfillment.

After relocating to Nashville with his wife, Sainato began playing at the world famous Grand Ole Opry with country music star Clare Dunn, an unimaginable opportunity. This stage set him up for where he is today.

Sainato said: “Right around the time when I was playing with [Clare], I met Jon from Nightly right when they got the project started. At the time, I was touring with them and Clare at the same time for about a year until Nightly started getting busier, and since then I’ve just been playing with them.”

Playing massive shows has become his new normal. “Best experience of this Nightly tour has been playing in arenas and having the whole crowd wave their phones lights during a song. Kind of a surreal experience. Pretty indescribable,” he said.

Without a doubt, being on the road has its pros and cons. When asked about some of the downsides of touring, he acknowledged that time apart from his wife and dog can be challenging. Additionally, bad WiFi and horrendous sleeping schedules don’t help.

What makes it all worth it for Sainato is seeing new cities and playing music every day.

One thing a lot of music fans grow to question is how tour life impacts family, friend and spousal relationships.

“It’s definitely hard being away from my family, but my wife is such a big supporter of what I do, and I’m am the same with her in her career, that’s what makes it possible for me to be on the road,” he said. “If it weren’t for her support, it would be impossible.”

With support from his wife, friends, family, community and bandmates, Sainato is succeeding and establishing his name in the music world, and living out his dream.

Nightly is growing in popularity across the pop and alternative scene and just released their new single, “Younger,” from their recent EP The Sound Of Your Voice. Check out Nightly’s six undeniably catchy and poetic songs below. 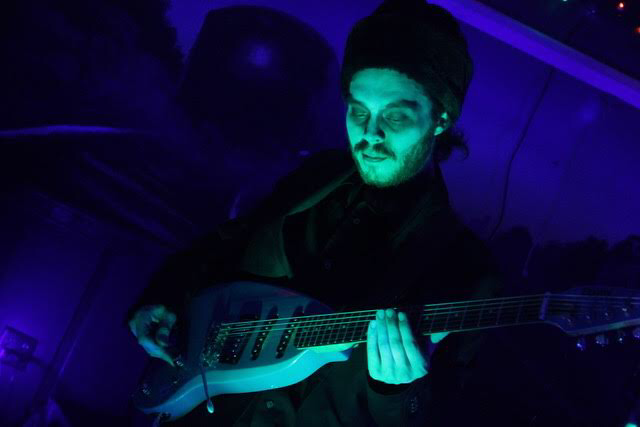