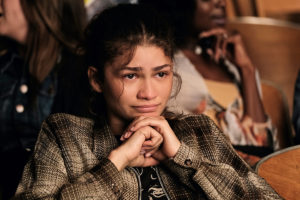 One thing is for certain about season 2 of HBO Max’s Euphoria: Zendaya can act!

Her performance was emotional, brutal, stark, and moving. It’s worthy as her Emmy  win for season 1. The season [1] showed Rue’s slip from sobriety to addiction, her open and vulnerable response to Lexi’s play suggests season 2 serves as the opposite. The prospect of healing is not an unknown side of Rue, but the willingness to heal is. The revival of her and Lexi’s friendship, her acceptance of Jules as a love of her past, and her goal of being a good person end her season 2 storyline with hope.

But while Rue’s storyline felt composed and final, so many others went unfinished and unaddressed. What happened to Laurie, who is the Jacob’s third son, what happened to McKay, what happened to Nate’s feelings toward Jules, and what happened to Kat’s cam-girl storyline? Whole on-set conflicts and vaccination status are rumored as the cause of some of these awkward plot holes, it doesn’t make sense to leave these questions completely unanswered. Cassie and Nate’s short-lived relationship seemed sudden and random, and Sam Levinson’s inclusion of details felt erratic and untethered. Euphoria has the potential and the characters to be so introspective and complete, but it didn’t feel that way.

Even though season 2 was laden in plot holes and unfinished business, it did have several good moments. Like Lexi and Fez’s romance; while it had little screen time, it felt new and right. Caz’s episode, especially the beginning, and the Tik Tokification of his “I am who I am” scene made his backstory memorable. Eliot’s head shove in episode 5 from Rue was perfect and deserved, and episode 5 overall was raw and well done. I think Maddie and Cassie’s Nate dispute and Cassie’s boy related behavior realistically capture the drama of being a girl. Fez getting shot had so much shock factor, Faye seems like she’ll play an interesting role in future seasons, and Ashtray will be missed.

Overall, while laden with rich cinematography and music, season 2 of Euphoria entertained, but didn’t make much sense. Spending time with the recurring characters felt comfortable, but the introduction of so many new ones felt cold and confusing. It did have it’s problems, but I do feel Euphoria will be a Sunday night staple for years to come.

More on the finale below: