Introducing the second batch of queens entering the Werk Room of RuPaul’s Drag Race. From the ever popular, gorgeous Jorgeous to the first heterosexual contestant Maddy Morphosis, and more. 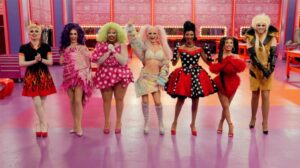 It’s a Ru Year and that means RuPaul’s Drag Race has returned and the season premiere is upon us. We’re pumped for another glimpse at future Drag Race royalty.

In this preview, the other half of the competing queens round out the remaining contestants coming for the crown. First is Jorgeous, the Tex-Mex Latina showgirl who is “a young dancing queen of Texas”. We shall see. We meet DeJa Skye, the pastel princess and cheer coach from Northern California. Jasmine Kennedie representing New York city and Joregeous thinks Kennedie may be her dancing competition on the runway.

Maddy Morphosis enters the Werk Room in his best Guy Fieri inspired drag. The self proclaimed campy and comedy queen is the first cisgender heterosexual male entering the competition. Next up is Angeria Paris VanMichaels aka Angie, she graces us with a glamourous polka dotted number. Lady Camden gifts us with her 90’s pop princess inspired look. The UK born queen wants us to know she is “the sixth member of the spice girls”. Daya Betty, who we thought may have been offspring of Acid Betty is actually apart of Crystal Methyd’s camp, the beat says it all.

The queens were aware that six other queens had already entered the Werk Room [in episode 1]. The queens: Alyssa Hunter, Bosco, Kornbread “The Snack” Jete, Willow Pill, June Jambalaya, Kerri Colby and Orion Story, who sashayed away. In the final moments of the video, Mama Ru tells the queens, its not about who arrives first but who last longest and lets them know, at the end of the episode one of the six  will sashay too.

Let’s see how the queens strut their stuff. RuPaul’s Drag Race airs Fridays at 8/7c only on VH1.