Call Me If You Get Lost Tour stops in Columbus, Ohio. 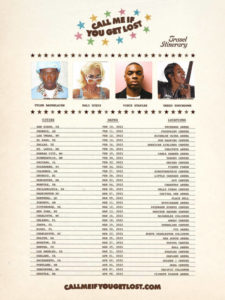 Tyler the Creator visited the Schottenstein Center in Columbus as his 11th stop on his Call Me If You Get Lost Tour. The show featured acts including Teezo Touchdown, Vince Staples and Kali Uchis who performed to the nearly sold-out venue. This was my first visit to the Schottenstein Center, all of the workers and security were extremely quick and helpful in navigating nearly 20,000 fans to their seats.

Teezo Touchdown opened the show, and his act was… amusing to say the least. The venue was still fairly empty when he performed, but he did a great job of raising the energy in the room from a static murmur to a buzzing hum of excitement. He performed a few of his songs, but the most memorable part of his act was screaming “OHIO” over and over, much to the excitement of the majority Ohio-based crowd.

After this performance came Vince Staples, along with a big-budget performance. Staples did not perform his set on the main stage, but instead opted for the platform in the middle of the general admission pit. He brought a great energy to his songs. I thoroughly enjoyed his performance and the energy he brought to the crowd. I was most excited for his last and most popular song Norf Norf, which Staples packaged with a fantastic light show performance as well.

The most notable thing from this entire concert was the excitement that fans had for Kali Uchis performance. When the two prior performers asked the crowd if they were excited to see her, it would not have been false to say that the shouts for her might have been louder than the screams for Tyler, the Creator. Her performance was theatrical, with her backup dancers performing intense choreography alongside her entire set and euphoric graphics dancing on the screens she performed in front of. As a Kali Uchis fan myself, I was most excited to see her perform Longer and telepatia. The only part of her set that might have disappointed fans was not performing alongside Tyler, the Creator for her single for After the Storm. Nevertheless, Kali Uchis had an amazing performance. She made sure to recognize her dancers before she acknowledged any applause for herself. 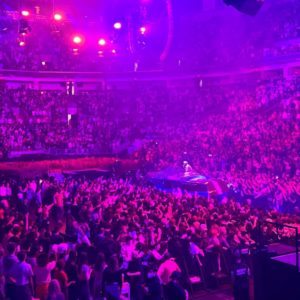 In a very Tyler, the Creator way, the rapper’s entrance was both grandeur and in your face. He entered the stage by climbing through the roof of a baby blue 1939 Rolls Royce while performing SIR BAUDELAIRE to his energized crowd. After joking around with the crowd and showing off his car, he transitioned perfectly into LUMBERJACK then went on to jump around to CORSO while pyrotechnic fire cracks flashed behind him. After riding a rocking boat into the center arena platform to the groovier track WUSYANAME, he then asked the crowd “I’m guessing some you wouldn’t mind if I played some of my older songs, right?” After his fans screaming approval, he played several of his older songs, including 911/Mr. Lonely, Yonkers, and Tamale. Most notable moments include his call-and-response from his audience during 911 and his Ohio-centric ad libs he threw in when he could. After returning to the main stage, he launched into Who Dat Boy and NEW MAGIC WAND, both of which brought back the fire effects and led Tyler to passionately sing his lyrics from his sprawled-out orientation on the stage floor. My favorite thing about his set de 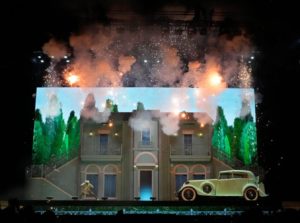 sign was the two-story house that sat on stage, which allowed for silhouettes of the art

ists that were featured on his songs but were not actually present to dance back and forth, as if they were actually there in the flesh. He closed his set with RUNITUP, leaving his audience wanting more as he picked up his su

itcases from his entrance to the stage and left through the house’s front door.

The concert showcased fantastic performances from all of the artists present, and I would highly, highly recommend watching their journeys online as they continue to travel the United States and beyond (you can find more dates here), and listening to any of these artists if you have not already.