Eliy Orcko tells you what’s on his mind. A t-shirt of the poster for Re-Animator, a gaudy and gory 1985 horror film, peeks out from beneath a blood red flannel shirt draped lazily over his lanky frame. As he sits on a shabby leather couch, idly flicking through a box of PlayStation games, he is nothing if not blunt.

“I would play NFL Blitz with my little cousin all the time,” he says. “You could just hide the plug for his controller in the back and he wouldn’t even notice he wasn’t playing while you beat his ass.”

This goes on for 35 minutes. Eliy is a natural storyteller. He recounts his days as a kid in Florida playing video games with the same clarity and insight that he flaunts in his music, and it becomes clear after talking to him for just a little while that he has something to say that’s worth listening to.

Eliy is an independent rapper based out of Elyria. His music is something of an outlier within the scene, drawing on elaborate sci-fi horror influences and blending them with ethereal lo-fi production and abstract yet uplifting lyricism. It’s a unique take on underground hip-hop, and it’s clear he means what he says.

“Live your life, be yourself, eat pizza, invest in your community, support other people’s dreams and your own, and believe everything is possible,” he says with a characteristically goofy grin. It’s not the world’s most elegant mission statement, but what it lacks in verbosity it makes up for in sincerity.

Eliy is putting the finishing touches on his latest and most ambitious project, Carcosa, slated for release later this year. The name, a reference to 20th century horror author H.P. Lovecraft’s Cthulhu mythos, belies the positivity that underpins Eliy’s work.

Eily’s chief collaborator on Carcosa has been Jack Dean, a London-based producer who has had a major role in shaping the evolution of Eily’s sound. The two communicate exclusively online, sharing beats and vocals back and forth and hammering them into shape. It’s an exhausting process, made more difficult by the sheer physical distance between the two, but after months of work, the album is nearing completion.

“I wanted to do something different,” he says. “I drew influence from H.P Lovecraft’s writing, but it’s much more about me and what I represent than that. The interludes and everything on the album will tie into the story elements, but with the songs, I wanted to take that influence and spin it in a more positive way that’s more authentically me.”

The authentic Eliy Orcko was born and raised in south Florida. Growing up, neighborhood kids would jump him on his way home from school, beating and bullying him for acting different. After a particularly brutal attack, an older boy, Johnny, intervened, sending the bullies scattering and befriending the ten-year-old Eliy. Johnny introduced Eliy to punk and metal music, and inspired him to learn guitar.

Eliy’s first foray into music was as a bassist for a Florida punk band, with Johnny on vocals, as a young teen. It was through the punk scene that he had found his first close circle of friends. These good times would turn tragic, though, as Johnny took his own life as a teenager.

“I tried to make sense of it for a while and I took over as a vocalist but I ended up wanting to break away from everyone, and just started making new friends and doing dumb shit with kids my age. Music got put on hold for a little while, and I would skate and do all types of stuff.”

Eliy’s teen years were marked by tragedy and grief, but his passion and creativity flourished. Another side of him began to emerge.

“He used to draw comics a lot and wanted to be a cartoonist,” Karr Antunes, one of Eliy’s childhood friends, remembers. “Although he may have changed his focus through the years, the determination to better himself is still there. We hit it off as friends right away, and I soon realized how crazy passionate he was and still is about the things he loves and wants to do.”

She hasn’t heard as much from Eliy since he left Florida, but she remembers their growing up together fondly.

“He used to make me personalized comics to cheer me up in ninth grade,” Antunes says. “We used to trade lunches, and he used to skate all the way to my house just so we could hang out at Target and eat cookie dough ice cream.”

Eliy and his world contain no shortage of contradictions — the skater punk that got beat up by neighborhood kids, and the kid who’d gorge on ice cream with his friend and draw her comics. The Lovecraftian life coach. Darkness and light.

Eliy migrated to Ohio at 16. By his midtwenties, he discovered a natural talent for rapping at a party with friends, and began to shift towards his latest muse. He’s released a handful of EPs and singles since becoming a rapper, and his role in the northeast Ohio DIY music scene is one built on a network of respect and cooperation.

“I think personally think he’s the leader of the local scene,” Darius McCall, who raps under the alias Foxxx, says. The two have collaborated together numerous times in the past, and have featured on each other’s songs a handful of times. “He looks for new talent and works with them, puts his people on to shows and links artists with other artists. He does his thing, regardless of if it’s returned or appreciated.”

Hip-hop isn’t exactly the most popular genre at many DIY shows, but that doesn’t prevent Eliy from taking the stage. His performances are often incendiary, as Ely’s metal roots take over just enough to give him a sense of aggressive swagger that perfectly supplements the music and wins over a crowd more accustomed to garage rock, punk and emo. Eliy’s ability to transcend genre and community lines is what first drew Akron-based alt-folk singer Jason Kaminski to him.

“I first met Eliy through [Elyria DIY venue] Blank Slate,” Kaminski recalls. “I think his ambition in putting himself out there no matter the type of bill is something he intentionally strives to do. I think that’s admirable since it’s not always easy to perform for a crowd that may not expect to hear your kind of music at a particular show. He works hard to evolve as an artist and is always open to new ideas.”

His interest in the heavy metal aesthetic is what drew him to horror, and in Lovecraft, he found an artist whose internal darkness reflected his own.

“Who really out here giving breaths of chaos to wild winds of fate?“  he raps on Carcosa’s “Over.” “Feeling the fleeting motion while other people out here fueling hate.” It’s a loose, jazzy track, whose hazy, atmospheric production bears Jack Dean’s indelible stamp.

Eliy is in the Black Squirrel Radio office, recording a trio of in-studio performances. He stomps across the rudimentary soundstage, an old CRT television behind him tuned to static. As he reaches the verse’s fiery crescendo, he slips up on the last line and curses to himself as the cameras stop rolling. He whips out his phone, eyes scanning the lyrics he keeps in a Notepad file. He raps the whole song to himself quietly, a mile a minute, committing it to memory. “Alright, I got it this time. Let’s do it one more time,” he says.

BSR Show of the Week: Punks Not Dead 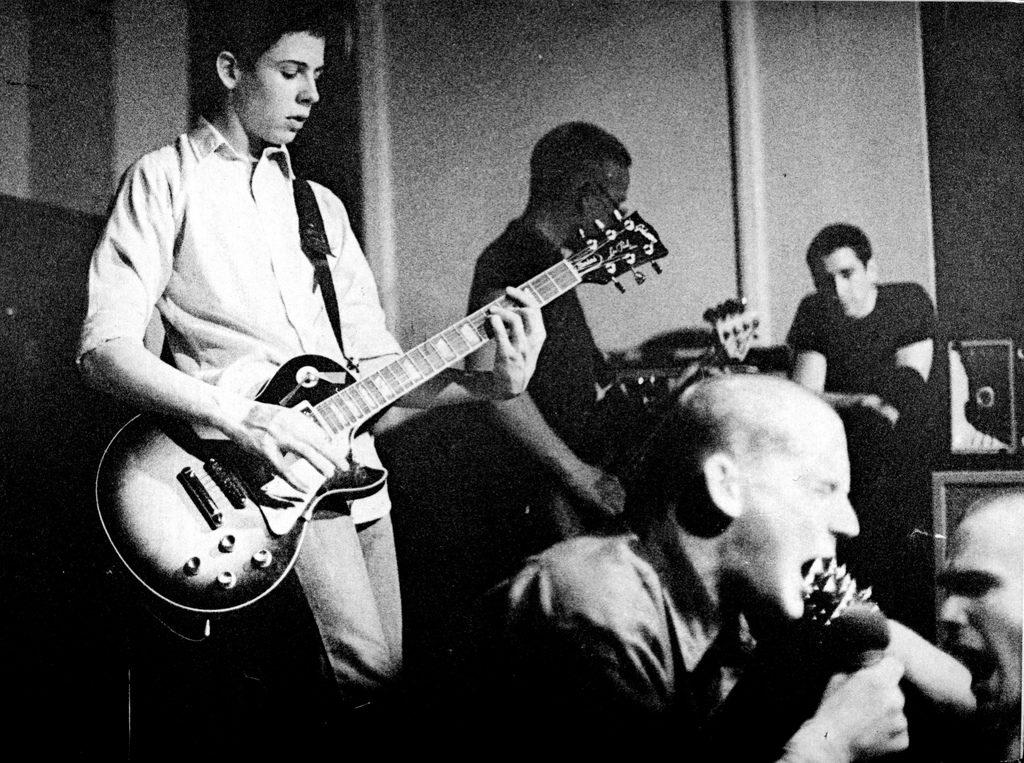