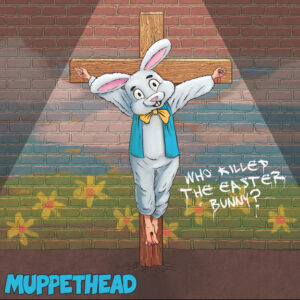 Title: Who Killed The Easter Bunny?

When I first arrived at Kent last year, I was taken aback by the burgeoning independent music scene that was taking place in the area. With bands like Cherrry, Cool Dads, and Pearly just to name a few there is a fierce creative element with all of these bands that give the listener a feeling of total intrigue. The same element is a part of this new release from Cleveland’s Muppethead, the band’s explosive power matched with their sense of humor creates a fun release in a world where everything seems to be serious.

Right off the bat, you know what you’re getting into when you listen to the first track Hot-N-Ready ($5 Pizza). The track has fun and bouncy feel that is reminiscent of Fat EP era Descendents. I especially enjoyed the lyrics in this song with my favorite being “I want it all to give me pizza by the foot” which while being silly is kind of the point and it allows the EP to get the ball rolling.

Some of the other highlights on the EP are Now I Wanna Be Alone and Johns Got Hemorrhoids. Both of these tracks highlight the chops that the band has, in Now I Wanna Be Alone there is some amazing bass playing happening where the bass harmonizes with the guitar to make a solid tune. In the song Johns Got Hemorrhoids, the band presents the listener with some great harmonies along with a great solo that shows the potential of the band moving forward.

There are some faults with the EP, and I believe it lies with this being the band’s first release. As with many, the first release is often a band getting started while trying to find a voice. The same could be said here I feel, the band has some great potential ahead of them and throughout the EP you can hear some great musicianship, but I get the sense that they might be clinging a little too close to the pop-punk/Ramonescore blueprint.

Although, I am still interested to see what the band will be doing moving forward.

Overall, I feel that Who Killed The Easter Bunny? By Muppethead is a good start to hopefully what becomes a great band. I’m fairly certain that I saw the band at one of their first live gigs at Slappy-Fest back in January and they were a great live act with a lot of energy so whenever live gigs start back up I would go and see them again. If you’re into that classic pop-punk sound then you can’t go wrong with Who Killed The Easter Bunny?