Written by Reegan Saunders on September 27, 2019

I’ve listened to my fair share of psychedelic rock. I can listen to Jimi Hendrix and Cream with the best of them. If you ask me about Pink Floyd, I could go on for an hour about how “Atom Heart Mother” should be their most celebrated piece of work, but that’s a story for another day.

When I was first introduced to the musical genius of Australian native Kevin Parker, it was in the form of his song “Elephant”. The combined power of the bass and the opening guitar riff makes for a song that is the epitome of classic rock. Not only that, but its ever-changing rhythm keeps you on your toes. In short, the song is catchy as hell. As the final yeah of “Elephant” blasted through my car speakers, I knew it was down the rabbit hole for me. 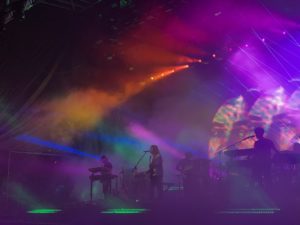 Needless to say, when I heard Tame Impala was rolling through Detroit during their summer music journey I had to get tickets. As they were the closing band for the two-day celebration that is the Mo Pop Festival, I was in for the long haul. Day one at the festival utterly wiped me out as I hopped between stages in the unbearably dry July sun. I had no idea how I was going to last until Tame Impala took the stage at 10 p.m. the following night.

However, the moment the fog made its descent across the stage, it was as if I had been recharged. When Tame Impala puts on a show, they are producing an entire orchestrated performance. The music becomes background to a constant laser light show briefly interrupted by a sea of confetti washing over the crowd. And if that isn’t enough for you, then the collection of hallucinogenic kaleidoscope videos that grace the screen definitely will be. If anything, the concert was sensory overload in the best way. 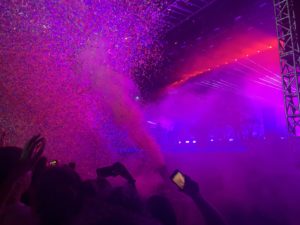 As an added experience, the way Tame Impala brings a crowd together is unparalleled. Typically, standing shoulder-to-shoulder and front to back with strangers is extremely uncomfortable. But in the countless hours prior to the show, I connected with the people around me on a more personal level. We eventually reached the point where I could write a biography on the 21-year-old SoundCloud rapper who was studying communication design at the College for Creative Studies. So by the time Tame Impala began playing it was as if we had known each other for a lifetime. We felt at home as we danced in the dirt, and I didn’t think to care if the person next to me could hear my offkey singing; instead, we focused on holding onto every second of the show.

As my friends and I made our slow, tired walk back to the car, I came to the realization that in the morning we would return to our everyday routine. Tame Impala mastered the complete out of body experience for the people whose drug of choice is a 12 ounce can of Redbull. Honestly, I wouldn’t be surprised if Parker knew the secret to time travel, because the experience he creates isn’t comparable to anything in the 21st century. I just wish he’d share the secret with me.