Mac DeMarco energizes The Agora in his return to Cleveland

(Words and Photos by Chris Ramos)

As the remaining members in the crowd feverishly waited for an encore that they chanted for, over and over again, guitarist Andy White walks out onto the stage.

The crowd begins to cheer and those that hadn’t yet exited the ballroom, slowly gravitate back towards the stage to see what’s going on. White asks the crowd to be quiet and he instructs them to be quiet after everything he says. Teasing the crowd, he says that there will be no encore and that Mac DeMarco is unable to perform because he “literally sh*t his pants”.

The joke carries on for a few minutes before Mac DeMarco appears on stage with a slouchy posture and a look of innocence as though he has no idea what is going on. Not long after, DeMarco and company dish out a cover of Metallica’s “Enter Sandman” and their rendition turns out to be rather interesting. They turn the song into a pulverizing thrash explosion, louder and faster than the original before slowing it down completely into sludge metal. They pick up their speed again and inject the otherwise indie crowd with a taste of the past.

That’s one way of carrying out an encore. DeMarco didn’t do too bad on his Hetfield impression either.

The Agora Ballroom & Theatre nestled within Cleveland was another stop for DeMarco on his tour that has been charging along since spring. Accompanying him on tour has been the art rock/experimental rock duo of Dustin Wong and Takako Minekawa. Wong and Minekawa have produced two albums and one EP together as their sound is unbeknown to any boundaries.

Opening the show, Wong and Minekawa got right into the swing of things. With Wong on guitar and Minekawa playing keys among other electronic components, the duo brought to the youthful crowd a realm that is distant from ours. Utilizing dissonance and a repetitive rhythm, Wong and Minekawa created a sound that was spacey, trance-inducing and minimalist at times. Minekawa’s vocals were faint, nearly whispers that came and went.

Behind them, geometric shapes were displayed on screens and these images were expanding and blending into each other to create a hallucinogenic experience. Along with the images, the stage lights bolstered the duo’s mystique as a dark red hue introduced them to the audience and as they settled into their set, a blue and green wave washed over.

Those that witnessed their performance could ultimately be separated into two groups. There were those that moved along with the atypical compositions and there were those that were frozen. For the people that were frozen, it could be that they simply were not feeling the set whatsoever. It could also be the element of shock or rather an exposure to a style that was so different.

The sounds, lights and images all worked as one cohesive unit and it was a lot to take in. It was hard to differentiate when the next part of their set was happening because it was threaded together for one ongoing experimentation. Simply put, it marched methodically. Once the obscure, electronic odyssey had finished, Minekawa and Wong bowed before the crowd. Wong picked up a microphone and thanked the crowd. He also shared their enjoyment about touring with DeMarco.

Dustin Wong and Takako Minekawa adjust their sound during their performance at The Agora on Sept. 26, 2019.

During the intermission, security guards were on hydration duty as they relayed bottles of water to attendees. At one point, one person fainted and was immediately taken to the side for help. Other than that instance, the course of the show ran smoothly. Although not filled to the brim, the balcony that hovered above the crowd was packed tightly.

The buzzing energy continued to grow as the clock struck 9 p.m. and the stage crew was finishing its due diligence. Beers were in heavy circulation and earthly aromas were spreading across the air. The time to hesitate was through.

It didn’t take long for DeMarco’s goofy antics to seep out, as one would expect. They all took their place and had with them their drink of choice. Andy White initiated the power move of tucking a beer in his back pocket upon their arrival on stage. The ballroom lights turned off and the green stage lights flared as DeMarco grabbed a microphone off of the stand. It was showtime.

The group kicked off the set with the melancholic “On the Level” off of This Old Dog, a song that possess a hypotonic synth and carries emotional burden within its lyrics. This was a vocal only performance for DeMarco, and he made the most of that opportunity as he so often does. He kept swaying back and forth and he would continually swing the mic by its cord around him like Roger Daltrey. It was engaging and it fed off of the energy radiated by the crowd.

DeMarco would then break off into this weird series of movements in which his arms would be stiff and he would awkwardly move them around as though he were trying to do “the robot”. One could argue that he was beginning to mimic Dr. Zoidberg off of the animated show, Futurama.

DeMarco hops around on stage during his rendition of “On the Level” at The Agora on Sept. 26, 2019

The heralded classic, “Salad Days” was performed next. Following the conclusion of that song, DeMarco picked up his acoustic guitar and told the crowd that the next track was off of his new album, Here Comes The Cowboy. Further back in the audience, someone screamed that his new record sucks. The comment was projected loudly, and it made its way to the stage. DeMarco laughed as he looked down at his effect pedals to get them ready for the next song. Andy White responded by saying that’s the first compliment that he’s heard. With that being said, they transitioned into “Nobody”.

Concert staples such as “Freaking Out the Neighborhood”, “The Stars Keep On Calling My Name”, “Ode to Viceroy” & “Chamber Of Reflection” were performed.

The sound within the Agora was surprisingly much softer than expected. It was hard to understand the dialogue exchange at times, especially for those encircling the outer barricade of the pit. You could literally hear conversations as songs were being performed. The sound wasn’t downright awful or even bad for that matter, it just packed less of a punch than DeMarco’s last visit to Cleveland in 2017 which was at the House of Blues. DeMarco alluded to this concert, making it known that it’s been a little while since his last show in the area.

DeMarco sounded damn good and it was most evident on “Finally Alone”, which requires him to hit some really high notes. He did just that.

A special rendition of “Choo Choo” surfaced, one that is far funkier than the studio cut. Aside from the infectious groove, Alec Meen laid down a soulful keyboard solo that added a whole new flare. “My Old Man” also saw a facelift sonically as the band carried out a slow, jazzy rendition that wasn’t as bouncy as the studio cut. During the chorus, DeMarco insisted on crowd participation, as he screamed “I want it fu**ing loud”. As the last go around with the chorus ensued, DeMarco screamed “This is your last chance!” with as much silliness as there was sincerity.

To conclude the regular setlist, the band belted out “Still Together” and it was undoubtedly the highlight of the night. The ballad put attendees under an empathic spell, as couples in the vicinity locked each other in and slow-danced. The song underwent an instrumental breakdown with White playing an extensive guitar solo that was raunchy as hell. DeMarco instructed the crowd to get down, to “sink” to the floor before he brought them back up and reverted back to the chorus once more.

Credit has to be given to DeMarco for his stage presence. It’s known that he has impressive musical ability. But what isn’t known by just listening to his albums is his ability to win over the crowd. Throughout the entire performance he is constantly getting the crowd involved and having fun with them. He uses his eccentric persona to bolster that connection. He knows how to work the audience which comes with the experience that he has. 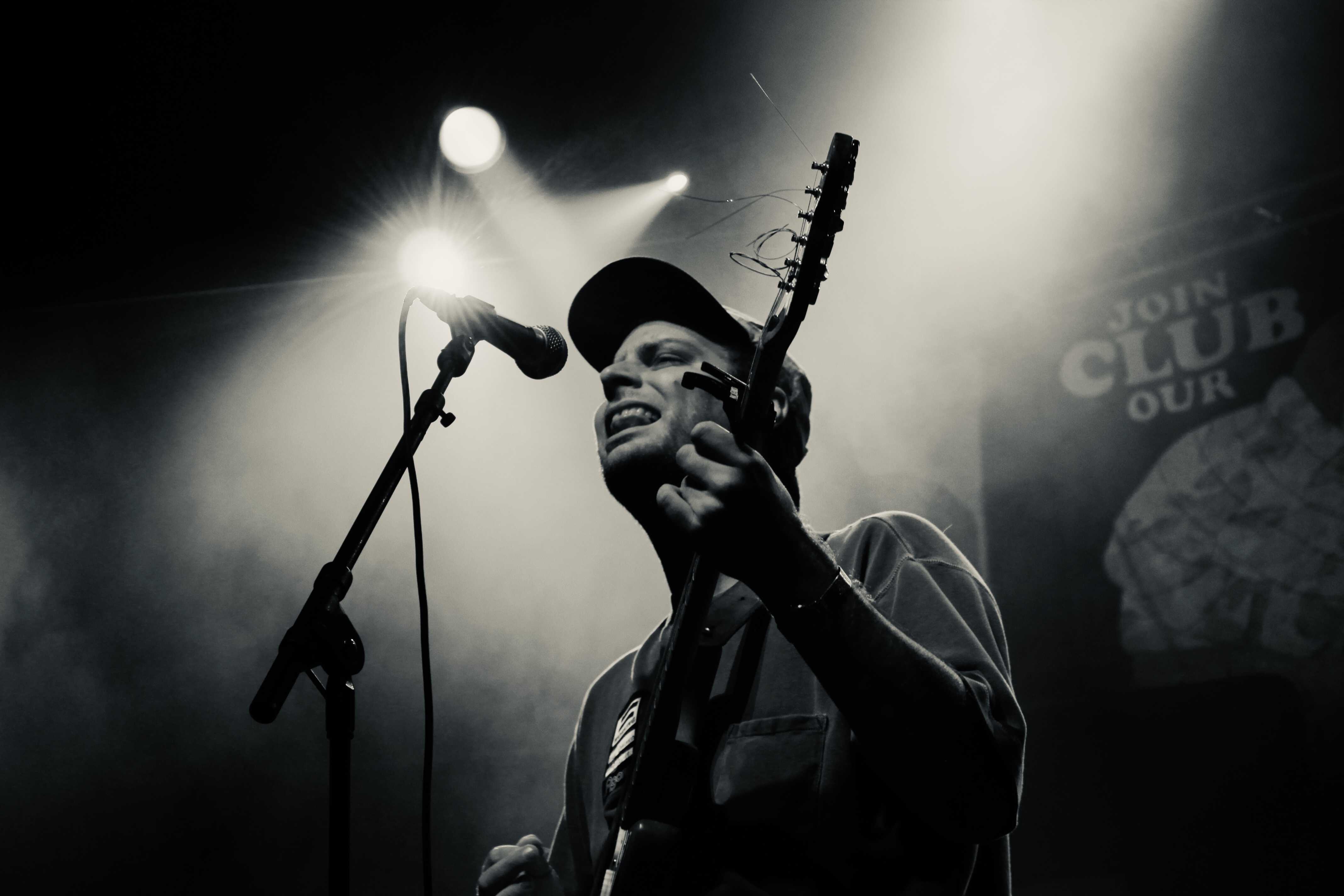 DeMarco sings into the microphone during his performance at The Agora on Sept. 26, 2019.

You don’t try to understand DeMarco’s weirdness but rather you just go with it. Even if it feels uncomfortable. It’s what makes him relatable, even approachable. His “down to earth” demeanor is why his fans are so passionate about his work.

With his red vans and high white socks and his Nintendo-64 cap, DeMarco looks like he would have fit right into the crowd. His image is only rivaled by that of White, particularly his mustache game. White could probably care less about personal aesthetics, but his style is best described as a guy from Miami Beach in the 1970s.

Looks aside, the band accomplished what they sought out to do and that was to play music and have a good time doing it.

Joe McMurray holds down the rhythm. 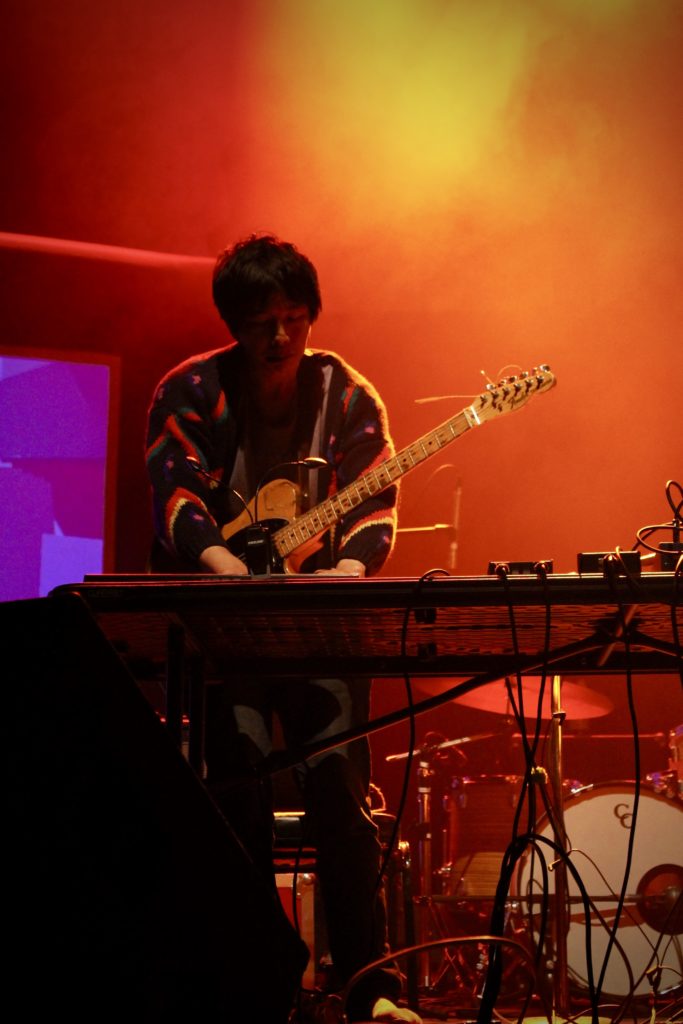 DeMarco clutches the mic as he gazes across the stage. 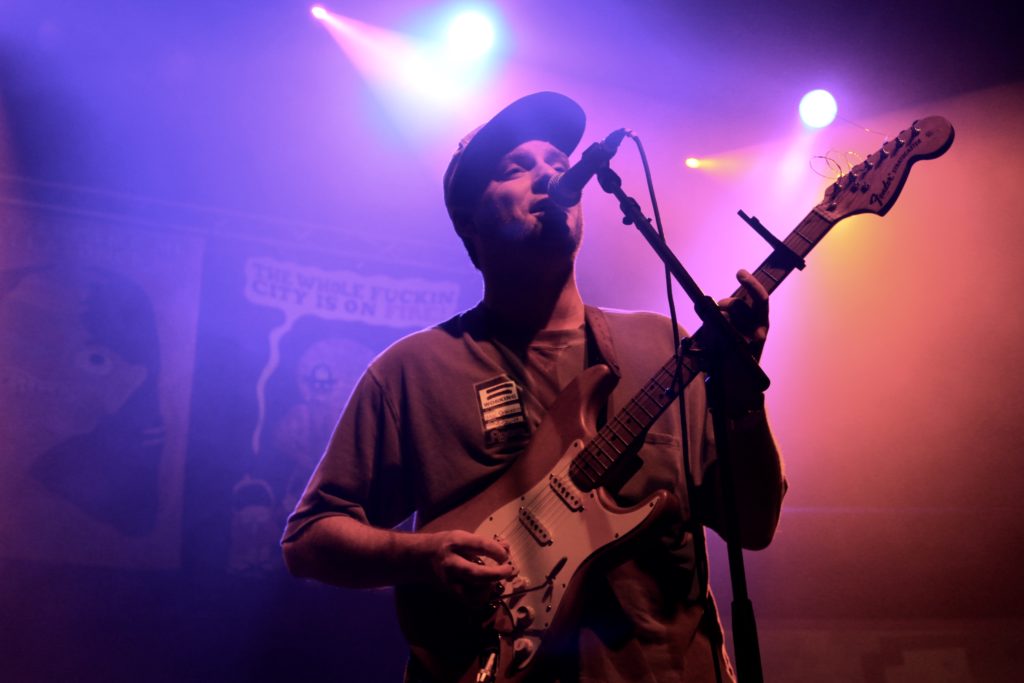 DeMarco singing into the mic. 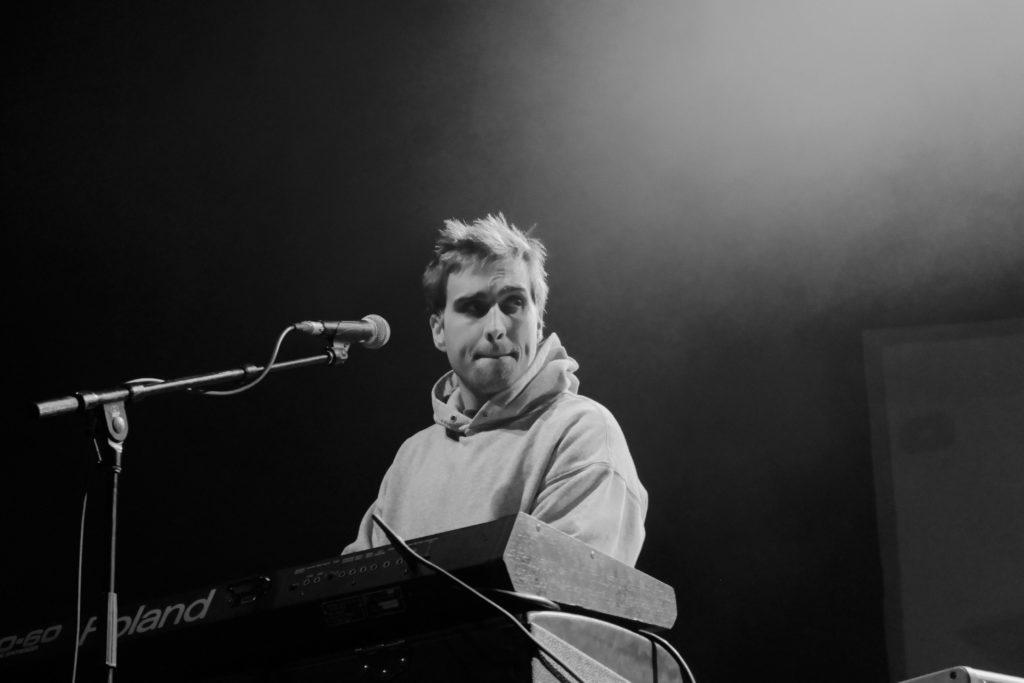 BSR Web Staff: How We Feel About Fall