October 30, 2021 was the day the Penn State Nittany Lions went on the road for a clash with the big, bad Ohio State Buckeyes at Ohio Stadium in Columbus. Over 105,000 fans packed into the Shoe to take in what is always one of the biggest games of the year. I had the pleasure of taking it all in from the press box and on the field.

What I saw that night was a spectacle unlike any other. I saw a stadium that looked like an ocean of scarlet. I saw a passion for a football team comprised of a bunch of college kids. I saw a packed house 40 minutes before the game even kicked off. I saw a powerful image. 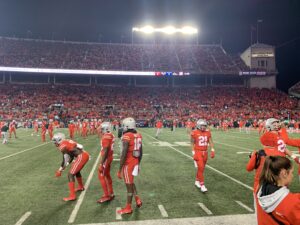 What I heard was an entirely different story.

I heard unfathomably loud crowd noise. Over 100 decibels (the security guard next to me had a noise meter). I also heard that aforementioned passion in every single yell. I heard it not just in the crowd noise, but from other media members, too. Columbus is a city that treats Buckeye football like a religion.

And when that game ended? The ocean of scarlet spilled onto the turf. 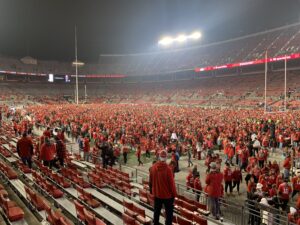 This isn’t unique to Ohio State. We all know that. Programs like Alabama, Clemson, Georgia, Oklahoma and even Michigan (you’re welcome, Paul) have tremendous atmospheres on game day.

There is one thing these programs have in common, though.

The Power Five. The cream of the crop in college football. The ACC, Big Ten, Big 12, PAC-12 and SEC.

These schools get all the attention. They get all the recruits. When you see them in the news on ESPN or other sports outlets, you think, “Huh, the rich get richer, I guess.”

That’s not at all a slight to any of these universities. They have elite facilities, elite coaching and quality academics. I don’t blame the athletes at all. Maximizing all of their opportunities is a smart decision.

Even the home-grown kids travel to bigger football schools when they have the chance. All you have to do is look as far as Drew Allar.

He’s a Medina High School kid. He’s a five-star recruit. He’s the top quarterback prospect in the country according to 247Sports. He’s one of the best high school football players I’ve ever watched. He’ll play for Penn State next season. That’s a four hour trip from home.

With all of that being said, how did we get here? What makes Power Five football the number one attraction for all of these highly talented student athletes? Why are Group of Five conferences given the cold shoulder?

That’s the real question. The question everyone has asked ever since the foundation of the College Football Playoff. What’s in it for the smaller schools?

The Group of Five. The AAC, Conference USA, Sun Belt, MAC and Mountain West. Just Sunday, December 5, we watched the first Group of Five school clinch a College Football Playoff berth in the eight-year history of the tournament (Cincinnati, AAC).

The Group of Five conferences have had some great teams in the past, as well. The best in the CFP era besides this year’s Cincinnati Bearcats squad would undoubtedly be the 2017 UCF Knights led by head coach Scott Frost (now the head coach at Nebraska) and quarterback McKenzie Milton (now at Florida State). UCF’s highest CFP rank was 6. They had a legitimate shot at the College Football Playoff, but had to settle for the Peach Bowl against #10 Auburn, a game they went on to win. They finished 13-0. Man, they were fun to watch.

And yet, even though the Group of Five provides quality, fun-to-watch football, it still struggles on a national stage. Some of the conference championship games speak to that.

The MAC Championship game took place December 4, 2021 from Ford Field in Detroit, Michigan. The Northern Illinois Huskies faced the Kent State Golden Flashes for the second time in the 2021 season. Kent State took the first matchup, 52-47. I took some pictures from the sideline of that game, and it almost looked like the theme for attire at the game was dress like a seat. 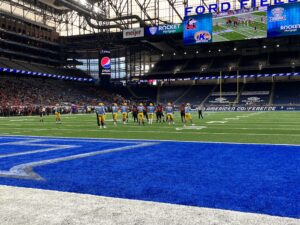 I think there were more people at this Massillon vs. St. Edward high school game I attended. 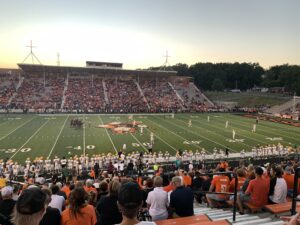 The venue for the MAC Championship game was fantastic. Ford Field is one of the finest stadiums I’ve had the pleasure to visit in my 19 years on this Earth. It’s not like tickets were overly expensive, either. Students were offered tickets AND a ride to Detroit for $10. There aren’t many deals better than that.

Tickets to the Ohio State vs. Penn State game were upwards of $200 for the nosebleeds. Fans are more than willing to fork over that hefty chunk of change.

Because it really does just simply mean more. Power Five college football is a pipeline to the NFL. Does that mean it’s impossible for the smaller schools to have Sunday talent? Not necessarily. But if you play Power Five football, you’ll always have eyes on you.

I’m not suggesting Group of Five schools should be held to the same standard as the Power Five. Rarely do you ever see a team from the MAC beat a Power Five team. Kent State played Maryland this year in College Park, and I honestly think they were just happy to have the opportunity. Attendance is a big issue for Power Five schools when they take on the lesser programs. Just take a look at this image I shot from that aforementioned Kent State vs. Maryland game: 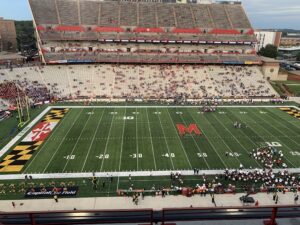 Tickets to that game in the lower bowl were as low as $6. I looked myself.

Not even the Ohio State Buckeyes are immune to that. A late September 2021 showdown with Tulsa saw just 76,540 fans at the Shoe, the lowest home attendance since 1971.

The reality is that interest for smaller programs just doesn’t really exist on a national stage. We as sports fans in society have grown up around certain college football teams forever. It’s drilled in our minds to cheer for the bigger schools. We even see it in the limited turnout at some games here at Kent State: If there’s a substantial Ohio State game going on at the same time, chances are, attendance for the Kent State game will be lower than usual.

I’ll admit, I’m just as guilty. I would say it’s more likely that I stay in and watch the Buckeyes than make the trip out to Dix Stadium. I was raised that way.

The Power Five will always run the show. That’s why the race to get to a bigger conference is always on. In 2023, we’ll see BYU, UCF, Houston and Cincinnati join the Big 12. We’ll see Oklahoma and Texas join the SEC. There is such a stupidly large amount of money involved that the universities look at the situation and say, “Why WOULDN’T we do this?”

At the end of the day, the NCAA is a business. College football is a business. Group of Five schools will always play those out of conference games against Power Five schools to start the year. You know, the games they lose 60-0 (For reference, Kent State will play Washington, Oklahoma and Georgia next season). Those games pay for the entire athletic department to operate at some institutions. That’s what I like to think the “Power” in Power Five stands for.

To sum this up in one word: What is standing in the way of the Group of Five schools to get to the level of the Power Five?

College sports are a microcosm of the world in that way. Money rules all. It always will.