Thursday, WWE will be putting on their first show in Saudi Arabia of the decade as part of the 10 year contract WWE signed with Saudi Arabia in 2018. For the second straight year, the first of two annual events per year will be Super ShowDown. Unlike in past years, this card has some build to it, so let’s dive right in and see who’s walking out of King Fahd International Stadium victorious.

“BRAY WYATT… YOUR NEXT!”

Those were the words of Goldberg on the Feb. 7 episode of Friday Night Smackdown on FOX.

I mentioned above how some of the matches on this card actually have meaning. This one is not one of them. While I enjoy seeing Goldberg back on my screen, and anything with Bray Wyatt and/or The Fiend is spectacular, this should be just another typical “Saudi Arabia money match” as the wrestling universe likes to call a lot of the top matches on the card at these “glorified house shows” nowadays.

I do think The Fiend and Goldberg can tell a good story as they are both tremendous workers. I’m hoping the match isn’t just a five minute Fiend beat down, and the two combatants can sell me on a couple of close calls. That’s all I ask for. Make the match fun, let the Fiend retain after a back-and-forth battle, and then let’s see where both of these superstars land on the Wrestlemania card. If the rumor provided by wrestling fans’ favorite Twitter account, WrestleVotes, is true, then I’m excited for what’s to come after Thursday. 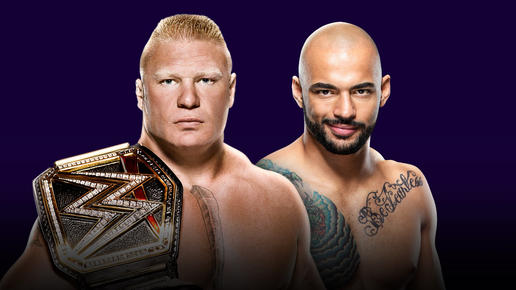 Look, I know a lot of wrestling fans like Ricochet and think he could be a big player in WWE for years to come, but I just do not see it. Yes, he has incredible athletic ability, but 95% of wrestlers in 2020 have the same ability, and Ricochet lacks a key ingredient for me: Charisma.

I just don’t see how he’s going to be a top guy, but maybe the fact that RAW Executive Director Paul Heyman, who is also Lesnar’s advocate on screen, has booked Ricochet in a title match with The Beast means that bigger things are coming for “WWE’s resident superhero”. Still, I’m looking forward to Lesnar suplexing Ricochet’s 188 pound frame all over Saudi Arabia, and I can’t wait to see Lesnar and the 2020 men’s Royal Rumble winner Drew McIntyre battle for the WWE Title April 5 in Tampa. 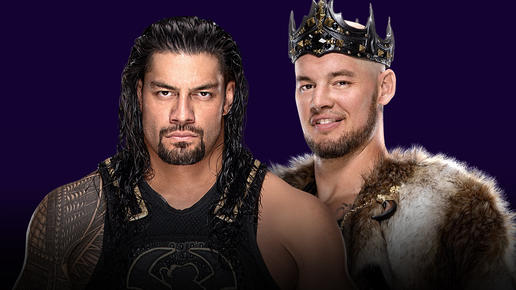 In my Royal Rumble preview, I stated I thought Reigns would win, and then he would win the Royal Rumble and move on to “The Fiend” at Wrestlemania. I was half right. While Reigns did beat the “King of the Ring” in Houston with a massive spear on top of the Houston Astros dugout inside Minute Maid Park, Reigns did not win the Royal Rumble, and now Corbin for some reason wants one more match with the Big Dog.

In my opinion, this feud has been drawn out one month too long, and it is time for Reigns to go over clean. Both superstars have benefited from this rivalry the last four months as Corbin has gained massive heal heat, and Reigns has got his way back to the top of the card, but these guys have fought each other in almost every match type possible.

Here’s to a good final battle with no interference from The Usos, Dolph Ziggler or Robert Roode! Let these two finish their feud alone by beating the hell out of each other. After all, that’s what a Steel Cage is for! 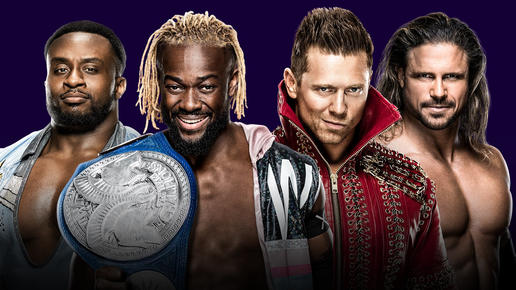 Since the start of the new decade, Miz and Morrison have reunited, and they have targeted the kingpins of the Smackdown tag team division. “The Dirt Sheet” believe New Day is too positive, and that the only reason why they have ran through WWE over the last six years is because Morrison was not in the WWE, and Miz was busy bringing the Intercontinental Championship back to prominence.

Over the last month, Morrison has defeated both members of New Day in singles action, and he has looked better than ever doing it, so I’m excited to see what these four talented individuals can do in the ring. I’m expecting a fantastic match, and I wouldn’t mind if this match opened up the afternoon to set the tone for the rest of the participants in the back.

We could have our next great New Day rivalry on our hands as I could see these two teams mixing it up for months, considering we have already seen New Day and The Usos battle, The Revival are on their way out of WWE, and Heavy Machinery and Roode/Ziggler are too busy fighting over Mandy Rose to be in the title picture right now.

My prediction for this contest? It’s really a 50/50 call, but I’m going to go ahead and say that we get new Smackdown Tag Team Champions here. I think it’s the only title change that can realistically happen, so why not? 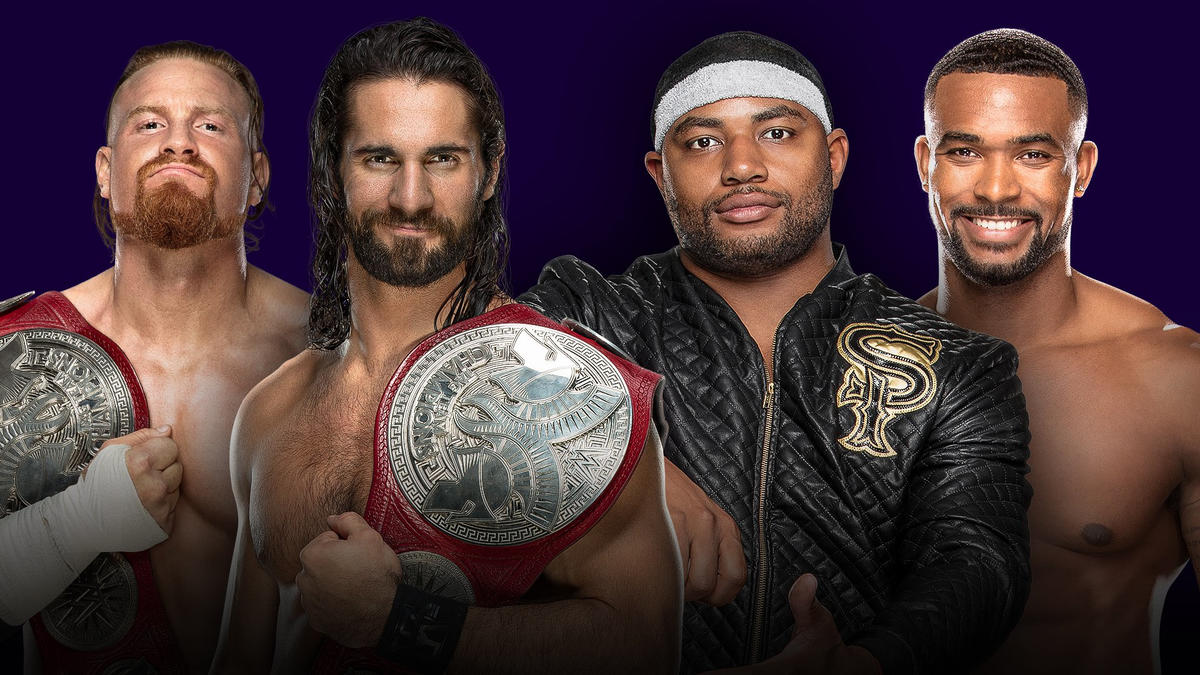 On the Jan. 13 episode of RAW, Seth Rollins and his cronies, the Authors of Pain (AOP) faced off against Samoa Joe, Kevin Owens and Big Show in a “fist fight”. The only way to win the “fist fight” was to incapacitate all three members of the other team. During the “fist fight”, Murphy was sitting ringside, distraught after losing three straight matches to Alistair Black within a month.

Rollins, now known as “The Monday Night Messiah”, begged Murphy to help him and AOP as they were struggling. Rollins plead worked because Murphy would deliver a low blow to the Big Show, allowing Rollins and AOP to recover and win the “fist fight”. Murphy stood tall with Rollins and AOP to end RAW, officially joining the group.

The next week, Rollins and Murphy defeated The Viking Raiders to win the RAW Tag Titles. After weeks of losing, Murphy was now a champion, thanks to Rollins, and now Rollins, AOP and Murphy have been feuding with The Viking Raiders, Owens and Joe for weeks. However, on the Feb. 17 episode of RAW, The Street Profits joined the good guys, forcing Rollins’ group to retreat.

We still don’t know why The Street Profits joined Owens, Joe and The Viking Raiders. They used to be friends with Rollins. Maybe they don’t like the new Seth Rollins, who has done nothing but speak the truth since turning heel and aligning himself with AOP back in December?

What I don’t understand is why The Street Profits get a title match here. What have they done to deserve a championship match? The answer is nothing, but let’s see what they can do.

In my opinion, they’re way better talkers than wrestlers, but I think Executive Director Heyman knows that eventually they’re going to have to win matches to stay relevant. Maybe this starts The Street Profits big push at the top of the tag division on RAW, even with a loss? 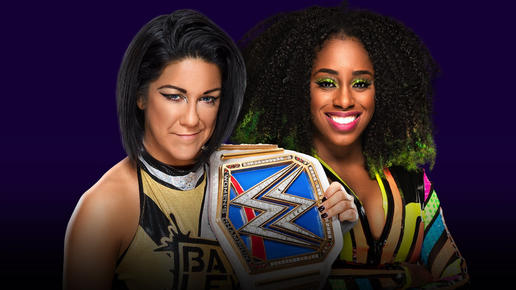 Last year at Crown Jewel, Natalya and Lacey Evans competed in the first ever women’s match in Saudi Arabia, a monumental milestone for the country and WWE. Now, WWE has raised the bar as for the first time in history, a Women’s Championship match will take place overseas as Bayley will defend her Smackdown Women’s Title.

Her opponent? Naomi, who defeated Carmella on the go-home Smackdown to earn this opportunity. Since her return at the Royal Rumble in the women’s Royal Rumble match, Naomi has set her sights on the champion. Bayley claims that she runs the Smackdown women’s division, and that nobody can touch her. Naomi wants to hold the Smackdown Women’s Title for the first time since 2017.

I side with Bayley on this one. Naomi does not deserve the title yet as she has only been back for a few weeks, and Bayley still has feuds to take care of as a heel champion.

Yes, this is another gimmick trophy match in Saudi Arabia, but this one actually has a few interesting story lines to follow.

Of course, R -Truth. Whatever he does is funny and entertaining. I don’t care what kind of match he’s in. I can watch Truth work all day.

Andrade, the current United States Champion, will be returning to action for the first time since getting suspended 30 days for violating WWE’s Wellness Policy, and Rey Mysterio will be out for revenge after Andrade took out Mysterio a month ago.

Lashley, who is still apparently feuding with Rusev over Lana even though that story line has died down as quick as a tornado rips through a city ever since “the wedding of the century” during the last RAW of 2019. has the opportunity to show off his wrestling ability with a great performance.

Rowan has a mystery pet in a cage that we still don’t know what’s inside it, and he’s been carrying it around for months. We do know that Rowan does talk to the “thing” like a baby, and that whatever is inside can bite because it has nicked Rowan a few times!

Then we get to my prediction of the winner, A.J. Styles. Styles will be back in action for the first time since nearly suffering a separated shoulder from an Edge spear at the Royal Rumble. On the Feb. 17 episode of RAW, Styles teased that he can beat anybody at Wrestlemania, and that he is the new “Mr. Wrestlemania”.

Not only can Styles win this match and hold a trophy like his fellow OC members Gallows and Anderson, but he can use the trophy to begin his Wrestlemania feud and if the rumor mill is correct, what a match it could be!

Brandon Lewis is the Web Director for Black Squirrel Radio. Follow him on Twitter @brandonlewis_7. Tune in to his show, “Brandon’s World” every Wednesday from 12 p.m. – 2 p.m. on blacksquirrelradio.com and follow his show Twitter @real_bworld.

Album Review: This is Called Survival