The Browns’ kicker Zane Gonzalez had a rough outing on Sunday in New Orleans, missing two field and two extra points, costing the Browns their first win of the season in the 21-18 loss.

While special teams was a glaring issue for the Browns, the pass offense got back on track. Quarterback Tyrod Taylor bounced back after a below average performance in week 1 against the Steelers. Taylor completed 22 out of 30 passes for 246 yards, 1 touchdown, and 1 interception, including a hail mary to rookie wide receiver Antonio Callaway late in the fourth quarter on fourth down to tie the game. Taylor looked to be in rhythm from the get go, and that is the critical for the Browns to be able to compete going forward.

The running game continued to struggle though just like last week. Starter Carlos Hyde had 15 carries for only 43 yards, netting an average of  just 2.7 yards per carry, but he did find his way into the endzone in the third quarter. Rookie Nick Chubb carried the rock only twice for 14 yards, and fourth year back Duke Johnson only carried it three times for three yards. While Tyrod Taylor balanced out the running game with his legs, running for 26 yards on only four attempts, the Browns running game has not looked sharp in these first two games. As I said last week, the Browns running backs have to run the ball better if they want to win. It opens up the playbook a lot more if you can win in between the trenches.

For three quarters, the Browns defense kept them in the game, holding quarterback Drew Brees and the high powered New Orleans Saints offense to only three points. Then, the fourth quarter happened. In the fourth, the Saints scored 18 points, including two touchdowns by Ohio State alumni Michael Thomas, Thomas finishing with 12 receptions, 87 yards, and the two scores. The Browns passing defense, as expected, struggled against Brees. Brees completed 28 out of 35 attempts for 243 yards and 2 touchdowns. Saints pass catchers got open at will. While the Browns played good bend but do not break defense for three quarters, they have to learn how to finish the game.

The running defense, unlike last week, was phenomenal.The Browns held Saints star tail back Alvin Kamara to 46 yards on only 13 touches. The Browns defensive line got a great push against the Saints offensive line for most of the running plays, allowing the linebackers to get to the slippery Kamara and bring him to the turf. The Saints in total only had 62 rushing yards on 23 carries, averaging only 2.7 yards per rushing play. If the Browns can keep that stat up going forward, they will be in a lot of ball games.

Next week, the Browns face off against rookie Sam Darnold and the New York Jets in primetime on Thursday Night Football in Cleveland. 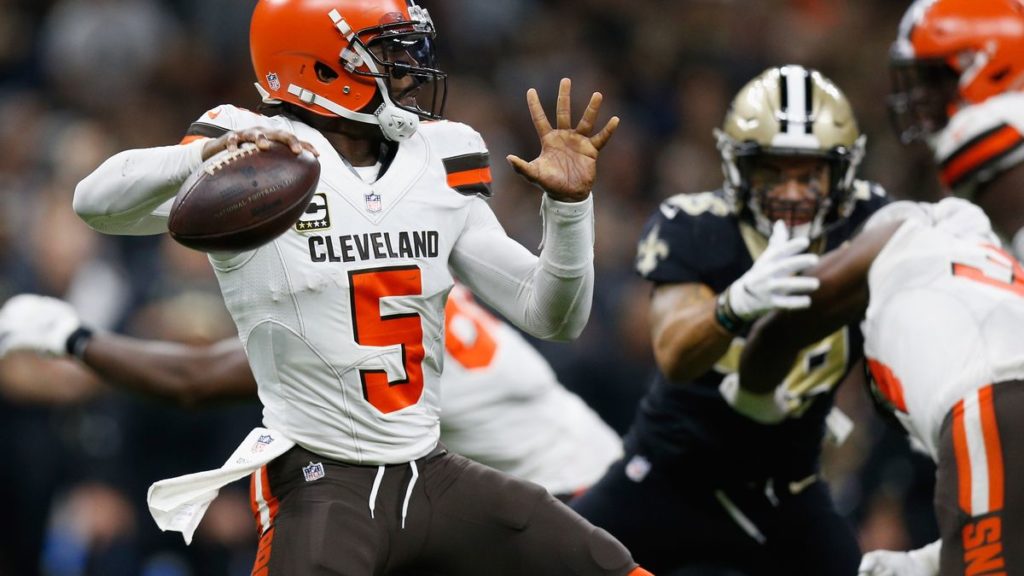 NFL picks against the spread: Week 2