Written by Administrator on February 23, 2019

If there is one thing on this planet that deserves more praise, it’s the music from The Legend of Zelda series. No, seriously. Right from the get-go, composer Koji Kondo delivered instant classics like the series’s main theme, and the “Temple” theme. The music is mostly upbeat, intense and gives the player a sense of adventure, while still providing catchy and memorable tunes. The first few games have soundtracks that still get stuck in my head, and are even more beautiful when performed by a live orchestra, in the case of the 25th and 30th anniversary concert tours (which I went to!). The true shining achievement of the games’ soundtracks comes in what is considered to be the greatest game of all time, Ocarina of Time.

Yeah, yeah, I know. Ocarina of Time has been praised to death, but when people talk about the soundtrack, the same few songs are brought up over and over, to the point where there’s really no reason to talk about them. While “Saria’s Song” and “Gerudo Valley” are great pieces of music, it is not what I would like to discuss in this article. What is so fascinating about Ocarina of Time’s soundtrack is how it switched up the formula that had been set by previous Zelda games. Ditching the fast-paced, upbeat music of the past installments, Ocarina of Time chooses to go in a more atmospheric, even ambient direction. This is what sets this soundtrack apart from other games in the series thus far and why it rewrote the book when it came to video game soundtracks.

From the very first dungeon, “Inside the Great Deku Tree,” the mysterious and curious nature of the game is set firmly in place. Taking place inside a hollowed tree god, the music fits perfectly with the atmosphere around it. The synths sound as if they were gusts of wind coming through different entrances to the tree, and listening to this song with headphones truly makes the player feel like they are Link. The song is simply an arpeggiated B7 chord, which gives the song a very calming quality. It is a great song to begin the game with, and introduces the ambient music concept perfectly.

Later in the game, the player encounters the “Ice Cavern,” a mini dungeon made entirely of snow and ice. Before I talk about the song itself, I would like to touch on the sound design for this dungeon in particular. Since the ground in the Ice Cavern is mostly made of ice, Link’s footsteps tap along the ground and create the most satisfying sound. It’s perfect. The song actually reminds me of the track “Frosti” from Bjork’s Vespertine. Both are icy, magical tunes. Even though the main melody is relatively short, the ambient noise backing the melody is constantly switching up, making the song feel much larger than it actually is. The wind is dark and sinister, while the bells and synths are bright and beautiful. The Ice Cavern is a relatively short area, but the composers put so much effort into it, perfectly showing the love put into this game. 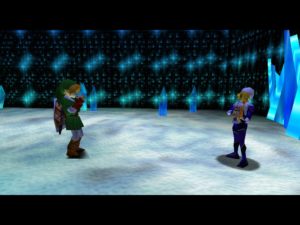 Link and Sheik inside the final room of the “Ice Cavern”

One of the things the Ocarina of Time’s soundtrack does so well is making the player feel uneasy, and evened frightened. Two prime examples of this come in the dungeon themes for “Jabu Jabu’s Belly” and the “Shadow Temple”. Jabu Jabu’s belly takes place inside a giant fish god, and has Link walking on fat and cutting down what appears to be veins. To compliment this odd environment, the composers give us a short, but sour phrase that is repeated over and over, but with sound effects in the background. Instead of wind, like in the Ice Cavern, it’s the sounds of Jabu Jabu’s organs making noises. It is exactly what I would imagine being inside a giant whale’s stomach would sound like, but I never thought I would have to think about that… Anyways what sets this track apart from others in the game is the boom-bap esque percussion. I would almost describe it as experimental IDM, and for a Nintendo game in 1998, that’s pretty insane. All of these combine to make a track that makes me feel like I’m getting nauseous, and I think that is the point of the whole dungeon.

The “Shadow Temple” dungeon takes place in what was once used by the royal family (the monarch of the game’s main civilisation) as a place to hold and torture prisoners of the family. The dungeon is filled with chains, spikes, and even guillotines that the player has to avoid, making it the creepiest area in the game by far. The theme 100% matches the atmosphere of the dungeon. All of the main parts of the melody are vocals that are obviously just synths, but it gives the song an inhuman-quality. The composers manipulate the synth in a way the human voice couldn’t possibly imitate, like taking a single pitch and warping it so low it no longer sounds like a voice. This track, as well as most of the soundtrack, uses noise to make the song feel more “alive”. What I mean by this is most of the songs have short melodies that are repeated, so sound effects and samples are used to distract the listener from the repetitiveness. The noise from this track are comparable to harsh noise music, coming in sporadically throughout the song, almost like a jumpscare. The only thing that stays constant during the entirety of the track is the bongos. This is actually a reference to the boss of the Shadow Temple, “Bongo Bongo”, a giant torso with no head and floating hands that Link fights on a giant bongo, floating in a pool of acid. Strange game. 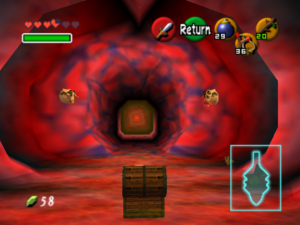 “Inside Jabu Jabu’s Belly” from Ocarina of Time Master Quest

Before I talk about the last song, I’d like to briefly list some songs from the game that are worthy of mention. I started this article because I wanted to talk about OOT music and it got way out of hand very quickly, and it could be a 100 pages if I talked about every song. Alright. Zora’s Domain is the most calming song and makes me want to be at the beach. Kokiri Forest makes me sad that I’m not a kid anymore. Goron City reminds me of “Papa Legba” by the Talking Heads. And the Title Theme is one of the few songs that I legitimately cannot listen to without crying, and I could have written more about it, but it is more of a piano ballad instead of ambient.

Alright, now. The final track I would like to talk about is the theme for the “Forest Temple”. This dungeon is an old abandoned mansion that is situated at the end of the “Lost Woods”. The forest has completely taken over the dungeon, with wolves roaming the floor, and vines wrapped around the walls. It’s even haunted! This atmosphere is my favorite in any OOT dungeon, maybe of any in the series. But what makes this dungeon so special is the music, obviously, or else I wouldn’t be writing an article about it! The song is so difficult to describe, but I will do my best. It opens on what sounds like hollow bamboo hitting against itself, then echoed multiple times. Again, it is so abstract that it is very hard to explain, but it creates this disorienting feeling, since it is repeated throughout the entire track. Then come in the synths, and oh my word these synths are the most heavenly thing I have ever heard in my entire life. They sound as if they were coming from somewhere deep inside the temple, getting louder and quieter throughout the song. They make me feel like I am being cleansed; like I am in a truly special place. The strangest part of the song by far is what I like to call “monkey noise”, because it sounds like a Siamang Gibbon, AKA the monkeys with frog-like pouches. And what makes this noise so weird, is that it isn’t creepy at all. It adds to the mysteriousness of the dungeon, without making it threatening. The noise is blended with a synth and eventually becomes part of the melody. All of these elements of the song combine to make one of the most magical pieces of ambient music I have ever heard. This track was the reason I sat down and decided to write about Zelda music, so if you have to chose one of these songs to listen to, make it this. 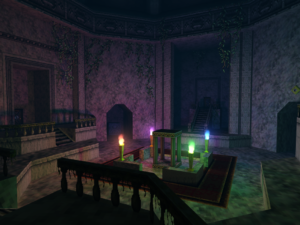 The main room in the “Forest Temple”

Welp! This was fun! While I do think Ocarina of Time does have the best soundtrack of any video game ever made, the other 3D Zelda games are nearly neck-and-neck. I plan on making this into a series and doing articles for every 3D Zelda, including Breath of the Wild. Hopefully I convinced you to give this soundtrack a listen!

Opinion: MLB Players Need to Suck it up and Deal with Salary Later

What COVID-19 Has Taught Me 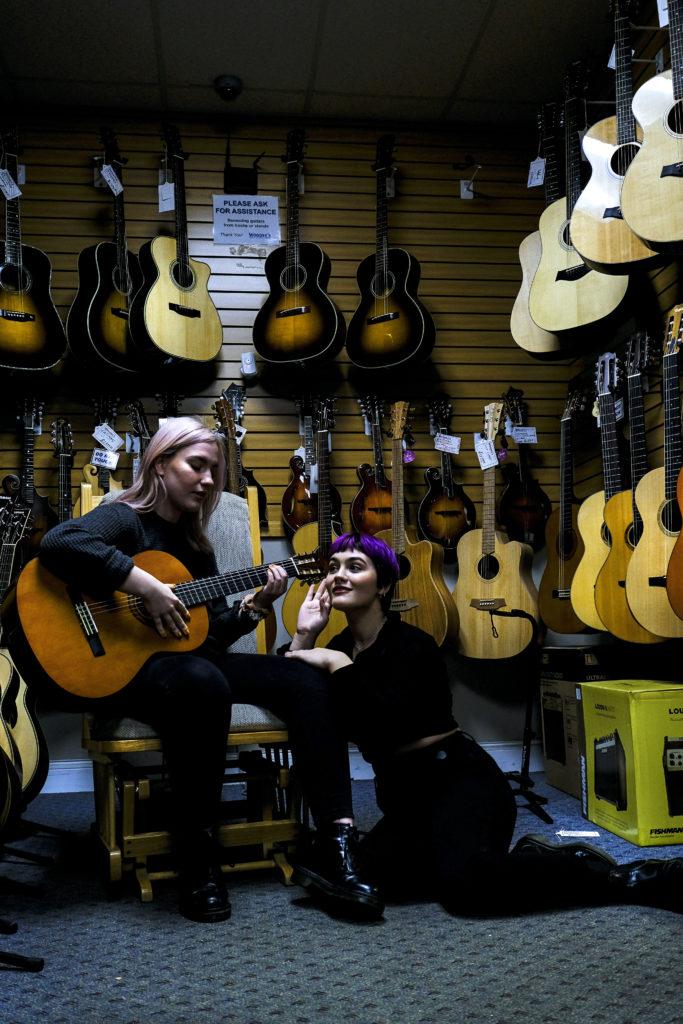 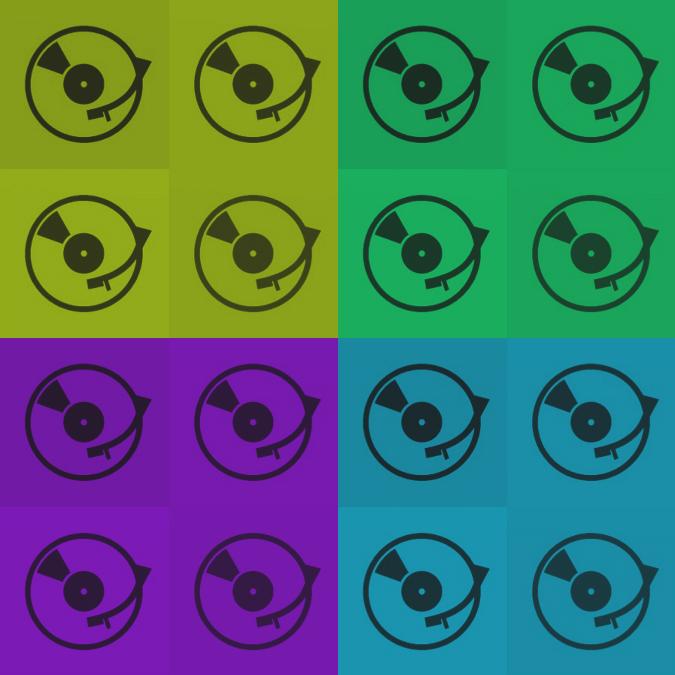