Who Hit Me Album Release Party 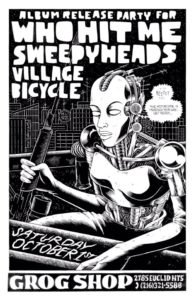 It was Saturday night in Cleveland, and I walked into the Grog Shop for the first time; the

entryway was covered in flyers and stickers from local acts and big names from over the years.

The grungy aesthetic of the venue sets the tone for the bands I’m about to see. Tonight, I’m here

for the the Who Hit Me album party, with local favorites The Village Bicycle, Sweepyheads and,

of course, Who Hit Me.

The Village Bicycle started things off with a neat collection of pop-rock and punk tunes,

and an enthusiasm I would assume can only come from a few good friends having fun. The band

was extremely in tune with each other, and was impressed with their instrumental sequences.

Sweepyheads, watching from the front row, got things moving during several of their tracks,

especially “Sprankles” and “She’s a Hero”. Just as the crowd was getting pumped, they chose to

By the time Sweepyheads was on deck, the place was filled. The band’s vivacious energy

and local popularity kicked the crowd into high gear. I had heard these guys’ recordings before,

but seeing them live for the first time was something else entirely. As one fan next to me put it

“This isn’t Rock n’ Roll, this is Sweepyheads!”. A small pit opened up, and I found myself

Sweepyheads’ “I’ll just go F*** Myself”. It was on of the most fun moments I’ve had at a

Finally, Who Hit Me took the stage. They didn’t waste any time, and blasted the crowd

with a heavier sound than either of the previous acts, and they hit it hard. The energy fueled by

Village Bicycle and Sweepyheads climbed higher and stayed there for much of the show. As

they progressed, I found that they managed to keep a steady tone and pace throughout, especially

with their new tracks, such as “I’m Happy if You’re Happy”. There was a bit of loss of

excitement during a cover of “My Generation”, but they managed to bring it back up. And even

as the crowd started to die down, they ended the show on a killer cover of “ All These Things

You can check out The Village Bicycle, Sweepyheads and Who Hit Me on twitter and Instagram @villagebicycley/ @thevillagebicyclemusic, @sweepyheads, and @whohitmeband, as well as on Facebook.

Keep Your Groove: A weekend at Resonance Festival