Written by Margaret Villarreal on September 29, 2021

Randall’s Island Park was a great place for this festival to be held. Not only was there enough room for over 200 vendors to be present but to get there by foot, you got to walk across the Robert F. Kennedy bridge. Once setting foot on the Harlem side of the bridge, you could hear the DJ performing at that time from across the water. I don’t want to diss the DJs, but I was personally not impressed with the musical choices made that evening. They all played early 2000 hip-hop hits, that sure, some were a blast from the past and nice but just didn’t fit the vibe for what you’d expect to hear at a vegan festival.

However, that was not the reason to be there so in the search for food we went. First off, the staff at Kokomo were very warm and inviting as it was our turn to walk up and place our order. They also had a clever ordering system in place so that ordering, and the pick-up lines were separated. Those at LoopHoles ATL were very sweet, as well as the lady at Krispie Verse. Maybe it was the lack of smelling cooked animals in the air that made everyone feeling happier but considering the lines that some individuals chose to stand in and wait for their food, the atmosphere was not the least bit chaotic.

Also considering that tickets were $7 before taxes for a 3:30-7PM window? You can’t beat that admission price and that was the perfect amount of time for us to be there! Check out my thoughts on the food I ate below! 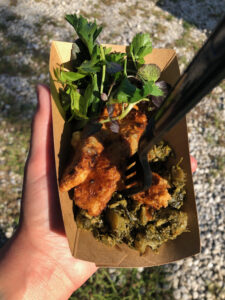 BBQ RIBS: (grilled vegan ribs with BBQ sauce, spiced callaloo and microgreens) This was what I came to this festival for, for some mouthwatering BBQ vegan food and Kokomo did not disappoint! The spiced callaloo was very flavorful and mixed perfectly with the microgreens. 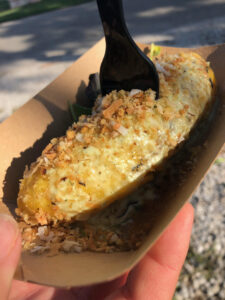 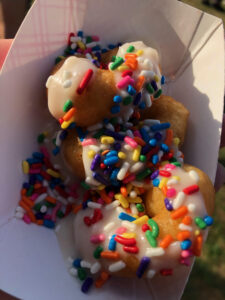 3 MINI DONUTS WITH NY CHEESECAKE DRIZZLE & SPRINKLES: LoopHoles ATL came from, you guessed it, Atlanta to share these mini freshly bakes with a variety of toppings to choose from that literally melt in your mouth. Warning: 3 were not enough. 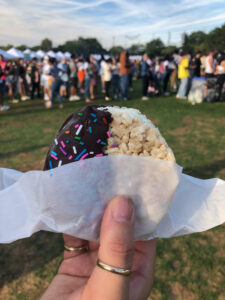 CREAMY COCONUT VANILLA ICE CREAM SANDWICHED BETWEEN 2 SOFT ORIGINAL KRISPIES, DIPPED IN SEMI-SWEET CHOCOLATE & SPRINKLED TO PERFECTION: Need I say more? I have never had a dessert that complimented itself so well with such a variety of textures and delicious flavors. Krispie Verse knows what they’re doing!

Ways to Communicate in a Long Distance Relationship