All photos are by Jenn Noga

The Driver Era just finished their third stop on their world tour at the Agora Theater in Cleveland this past week, accompanied by Moontower and The Wrecks. This was my first time at the Agora, and also my first concert in general. That being said, I loved the entire experience from the moment I walked in to the moment I left the venue’s extremely confusing parking lot. 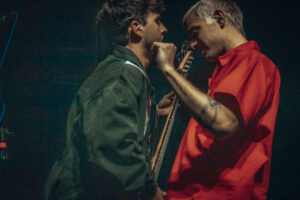 The first opener of the night was the band Moontower, an indie-pop band from Los Angeles. Lead singer Jacob Berger had amazing energy and was able to get the crowd on their feet, especially to their groovy cover of “Oops… I Did It Again” by Britney Spears. Guitarists Tom Carpenter and Devan Welsh also had great performances. The trio also took the time to talk and take pictures with fans after the show, and meeting them was an incredible treat.

Once the Moontower banner was replaced with The Wreck’s op-art poster, the energy in the room amped up. Anyone there could tell that a sizable portion of the viewers came specifically to see this band. Though I had not listened to their music before the show, I will definitely be adding Favorite Liar and James Dean into my current song rotation. 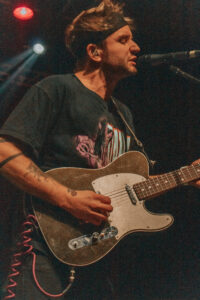 The Wrecks by Jenn Noga

The transition from Moontower to The Wrecks was noticeably shorter than the wait for The Driver Era. Though I was beginning to lose feeling in the sides of my feet (note to self: maybe leave the Doc Martens at home for the next concert), the smoke machines and vibrant green light made me forget my troubles; Ross and Rocky were about to come out. 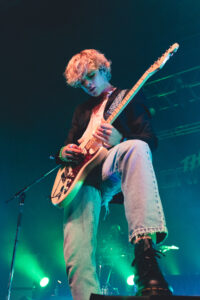 The Driver Era by Jenn Noga

I think the best thing The Driver Era brought to their concert was the brotherly interactions between Ross and Rocky onstage: you could tell they were enjoying themselves as they performed. While they played a fair amount of songs from their 2019 album X, they also included many new tracks from their latest album “Girlfriend,” (you can read my review of it here) and from the looks of most fans in the crowd, countless concert-goers were wishing they were the girlfriend of one of the two brothers. I was very excited to hear them play my favorite songs of theirs, including Natural, A Kiss, and Heaven Angel.

The Driver Era by Jenn Noga

I was even surprised to find myself enjoying OMG Plz Don’t Come Around; though I did and continue to not entirely enjoy their studio recording of this song, I really liked how it sounded live. Ross Lynch’s choice to change into a Cleveland Browns shirt halfway through the set also brought additional excitement to the many Clevelanders in the audience.

Especially in a world post-Travis Scott’s Astroworld catastrophe, the attention to safety was definitely felt throughout the entire set. Not one, not two, but three times did Ross Lynch bring his set to a screeching halt due to a fan fainting in the pit. Though energy was definitely lost after each stop, the band was able to bring most of the energy back as they either restarted or moved onto the next song.

All in all, I really enjoyed the show, from the beginning to the end. That being said, I cannot wait to go back to the Agora and follow the journeys of Moontower, The Wrecks, and The Driver Era as they continue to tour the United States and internationally.

You can find their upcoming tour dates and tickets here.

The right way to Date On the net