Written by Joel Neuschwander on September 23, 2019

Week 4 of the college football season was a wild one. Several undefeated teams saw their perfect record derailed while the top championship contenders continued to dominate. In this article I’ll recap the biggest games of the week, the biggest storyline, give a look at my personal Top 5 teams and share who I think the players of the week were.

Games of the week

Things weren’t looking good for the Trojans when freshman sensation Kedon Slovis got injured on the first drive of the game. The quarterback had led USC’s offense to a promising start over its first three games. Matt Fink stepped in and picked up right where Slovis left off, throwing for 351 yards and three touchdowns.

Coming into the game, Utah was the Pac-12 Conference’s best hope at earning a spot in the College Football Playoff, but with this result, the conference is now wide open.

Before Saturday, The UCF Knights hadn’t lost a regular season game since 2016. That all changed when Pitt quarterback Kenny Pickett CAUGHT the game winning touchdown with less than a minute left in a play reminiscent of the Philly Special in Super Bowl 52. In a back-and-forth game, Pitt took a 21-0 lead, and UCF stormed back to take a 34-28 lead of its own before Pickett’s score with 59 seconds left.

In a game between two Top 10 teams, it was the Georgia Bulldogs who strengthened their playoff resume with a tight win over the Fighting Irish. UGA quarterback Jake Fromm was efficient, and Bulldogs running back D’Andre Swift added a touchdown on the ground. A late rally by Notre Dame fell just short.

Storyline of the week

After Utah, Arizona State and Washington State all lost this weekend, the conference now only has one unbeaten team left: the 4-0 California Golden Bears, who barely survived Ole Miss on the road.

The league has been left out of the playoff the past two years, and it looks like that trend may continue as its top teams start to beat each other up. Oregon and Washington could be its best chance to return to the Top 4, although each team will need to run the table.

My Top 5 teams after Week 4

Players of the week

It’s hard to believe what Gordon was able to accomplish on Saturday night as he threw for 570 yards and NINE touchdowns in WSU’s 67-63 loss against UCLA. Gordon connected with six different Cougar receivers for a score with Easop Winston leading the way with four touchdown catches. WSU quarterbacks almost always put up gaudy numbers under head coach Mike Leach’s air raid system, but Gordon took it to a new level.

Taylor ran all over the vaunted Michigan defense on Saturday, continuing his push for the Heisman Trophy. His 203 yards and two scores on the ground propelled Wisconsin to a 35-14 win that shakes up the Big Ten Championship race.

Auburn’s dominant defensive performance against Texas A&M was led by Brown, who recorded three tackles for loss, two sacks and a forced fumble.

A Sunday Night Filled With Errors, Browns Lose To Rams 20-13 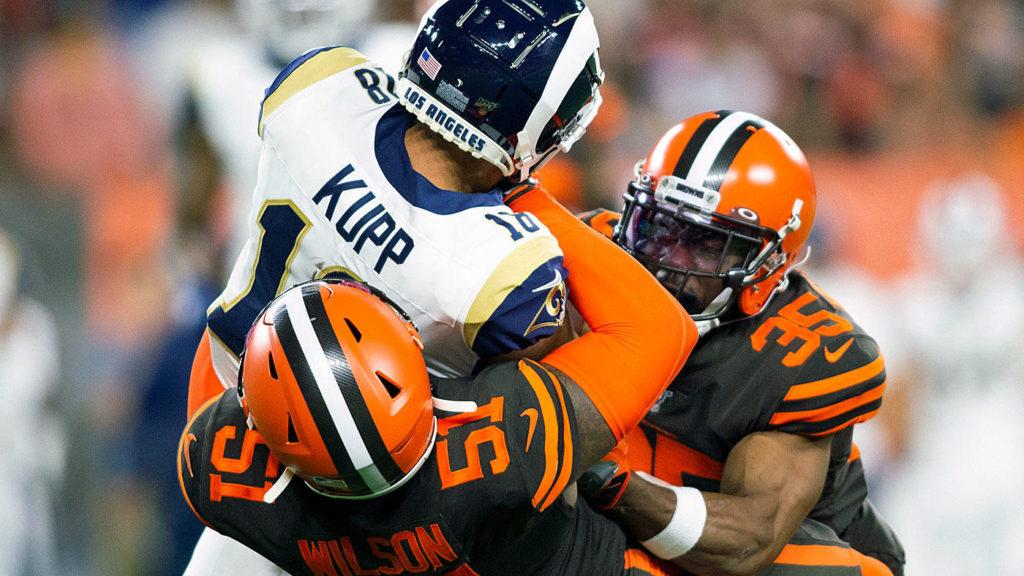