This college football season has been wild to say the least. All of the major blue bloods, are ranked and good again, except for Miami really. It is obvious that no team can keep up with Alabama this year. QB Tua Tagovailoa is the frontrunner for the Heisman and they look unstoppable. Clemson, LSU, Ohio State and Michigan are the only teams that have chances of challenging the Crimson Tide.

Alabama has never had an offense with a QB that could throw this accurately. Tua is so efficient that he only has to throw throw the ball 15 times a game and usually four of those passes are touchdowns. He sits out most second halves as Head Coach Nick Saban opts to throw in Jalen Hurts. The offense is much better with Tua in more than Hurts, but this squad is easily good enough to win the CFP this year with either one at the helm. Their defense is just as dominant as it has been in year’s past and their offense is the best in the country for the first time ever under Saban. The Tide do play LSU and Auburn later in the year, but I think they will roll by double digits. I wonder if this team could actually beat an NFL team. They are one of the best teams I have ever seen play and I believe they will win it all.

Clemson struggled against Syracuse and Texas A&M but they seem to have fixed their offensive problems. With QB Trevor Lawrence in, they are the second best team in the country as of week 8. RB Travis Etienne is a top five back in the nation and runs all over every defense. The only running back that might be better be Wisconsin’s Jonathan Taylor. I have no concerns with the Tigers defense as most of them are all first rounders and they don’t give up many yards and points. They should easily win the ACC and coast into the playoff. They will be the 2-seed if they win out and Bama wins out. That means if they get the 2-seed and win their first game, we will likely get Clemson-Alabama part three! 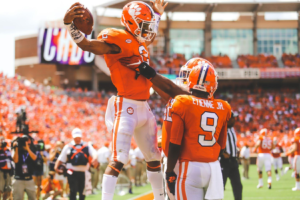 I don’t have any faith in Notre Dame. I am frankly not even sure how they beat Michigan in week one. Michigan would smack them now. And they beat the Wolverines with QB Brandon Wimbush starting. The Irish have already won all of their tough games as they smacked Stanford and Virginia Tech. They should run the table as they play Navy, Northwestern, FSU, Syracuse, and USC in their remaining games. If they win out, they are in without a doubt. They will get destroyed by whoever they face in the first CFP game if they make it, whether it be Clemson or Alabama. 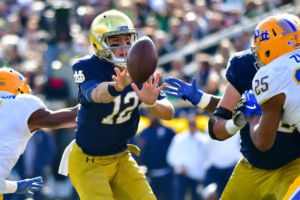 That Ohio State defensive performance against the Boilermakers was absolutely pathetic. If not for QB Dwayne Haskins, the Buckeyes would probably have three losses by now. The Buckeyes threw the ball 73 times against Purdue and ran it only 20 times. Some position coaches and coordinators might need to be fired soon. The linebackers and defensive backs take horrible angles on tackles and the OSU defense has given up an absurd number of big plays. Luckily, most teams have ended up with field goals so far instead of touchdowns, until Purdue. Their offensive line has been terrible for most of the year as they miss assignments quite often and commit stupid drive derailing penalties way too much. Isaiah Prince needs benched as soon as possible. This team has no discipline on defense and some of the starters need to be benched. Also, Urban needs to start utilizing QB Tate Martell more. Let him take some snaps and Ohio State can only get better from using him more. Haskins is not mobile and it has hurt the Bucks at times this year as he can’t scramble much and if a team gets pressure they are in trouble. The Buckeyes couldn’t score at all in the red zone against Minnesota and Purdue, and if they put Martell in some designed run packages like they did with J.T. Barrett, it would add another dimension to their offense. Haskins should never have to throw 73 times in one game, that is not a recipe for success. There is so many things that need changed if they want to win the CFP. They have the talent to go all the way, but the defense has not played like it yet. “The Game” will be insane this year as the winner will likely go to the B1G Championship and then the CFP. Whoever wins might just have to play ‘Bama and that game will draw massive ratings. Haskins is 2nd in the Heisman Race and has a chance at winning it if he does as good as he did in the first half of the year and if Tua Tagovailoa slows down or misses a few games, as he injured his knee a few games ago.

Michigan might be the hottest team in the country, excluding Alabama. They have the best defense and they are finally getting things to break in their direction. Their defense gave up less than 100 yards against Michigan State, that is insane. It is super hard to move the ball on them. They would be undefeated if they were prepared against the Irish, but it was week one and they came out cold. They are a completely different team now. The offense still struggles to get points in some games, but you know they won’t give up much. They also need to call more pass plays and run just a tad bit less. Be more aggressive and you will score more, but that is not Harbaugh’s forte. They have a tough matchup against Penn State coming up, but I think they will win that. By the time of “The Game,” both teams should only have one loss and it will be a winner-take-all. It will definitely be a classic and I cannot wait for Nov. 24. 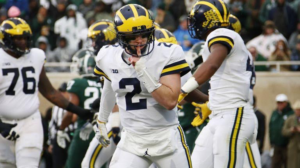 LSU will probably be the only team that will challenge Alabama, for at least a quarter. QB Joe Burrow is a great game manager for them and their defense is elite. They have exceeded all expectations and have the best wins out of anyone. Their strength of schedule is ridiculous as they have played or will play seven ranked teams this season. The offense doesn’t score much but their defense keeps them in games and they do just enough to win. They play Alabama on Nov. 3 in Death Valley. Whoever wins, gets the SEC West and likely the playoff spot if they win out as well. Now if LSU beats Alabama, which I don’t think will happen but it’s possible, and if they win the SEC Championship then both of them could make the playoff. That’s a crazy scenario. Who would they pick, LSU or Michigan/OSU winner? 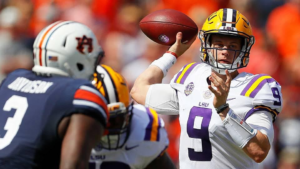 I don’t think Texas is as good as their rank is and they will lose to West Virginia. Their win over Oklahoma was very lucky. Oklahoma’s offense is one of the best out there, but that defense is one of the worst. The disparity is crazy. Florida can actually win the SEC, but only if they beat Georgia and then Alabama, but the chances of that are very slim. Washington State is the Pac 12’s only hope and they aren’t even that good. They just hosted their first GameDay ever and beat Oregon somehow, but they always lose a few games every year. They don’t really have any chance at making it as they are ranked too low. The Big 12 and the Pac-12 will probably not be represented in the CFP this year unless Oklahoma or West Virginia wins out super impressively.

I think Tua will win all the awards and the trophy that matters most. I hate to say it, but I don’t think anyone can beat the Tide. College football needs more parity among the top teams. I would appreciate if referees would make better calls and not influence the outcomes of games with phantom calls, this has happened way too much. For all we know, UCF could magically make the playoff and win it all. That would require a lot of upsets, but anything is possible in college football. 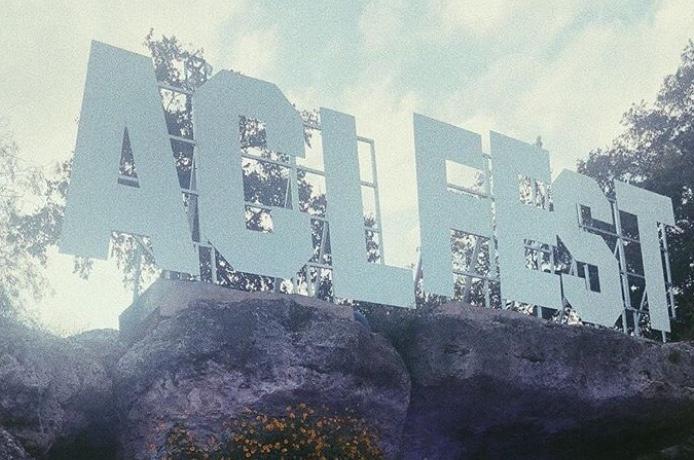