Written by Mikala Lugen on September 8, 2017

Nelson Ledges Quarry Park opened its gates to 5000 festival goers for the long Labor Day weekend for the 10th annual Summerdance, consisting of three nights of jams in the woods from September 1 to September 4.

The weekend was chillier than we had all hoped but nevertheless was a blast. People started showing up to claim campsites as early as a week before to enjoy the beach and peaceful woods.

Sammy Ruckspin and Mr. Segrin, the faces of STAY AT HOME DABS, were the first set of the weekend, turning the sandy stage into a club dance floor. 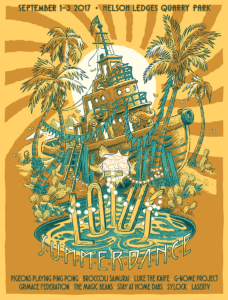 Promotional Poster for the Event

As the stage area began to fill up, local artists posted up their creative spaces in the pavilion to live paint during Lotus’ beautiful performance, allowing the music to inspire their imaginative subconscious and create works of art that only the music could helped transpire.

Lotus kicked off the first night with some of their older tunes, starting with their 2004 house tune, “Jump Off” getting the crowd into the right dancing mood for the weekend. They slid right into their jazzy “Bubonic Tonic” before going back into “Jump Off” and playing their 2016 “White Light Fadeaway.” They guys surprised the crowd when they started playing their recent 2017 release of “For the Summertime,” one of the first times they’ve played the song live. “Sunrain” was the closing song for the first set, leaving us in high-energies before they took the stage for their second set and starting off with “Scrapple.” Guitarist Mike Rempel kept the energy alive with “Comptroller > Did Fatt,” and set the mood of putting us in a daze as they slipped into their melodious “Umbilical Moonrise.” Everyone cheered as the last chord struck out and enjoyed a moment of bliss. The guys encored with their progressive rock tune, “Age of Inexperience,” ending the first night in high spirits.

Although the music ended at 11 p.m., the festival stayed wide awake as people retreated back to their campsites for the first night of partying in the woods. Firespinners and performers danced on the beach, while drum circles uplifted the spirits of those around. The woods were packed with thousands of people around campfires, blasting all kinds of music and fireworks throughout the night. Throughout my journey in the woods the first night, I came across a campsite that largely projected the live-stream, sold-out Phish show in Colorado, a perfect way to end the first night.

The second day was greeted with gray skies and upper 50s, so we all bundled up in sweatshirts and hats to last us throughout the day. Some earlier-risers met on the beach for various yoga and meditation workshops in the late-morning, while vendors were getting ready for the lunch rush and more people arrived to make the last two days of the festival. 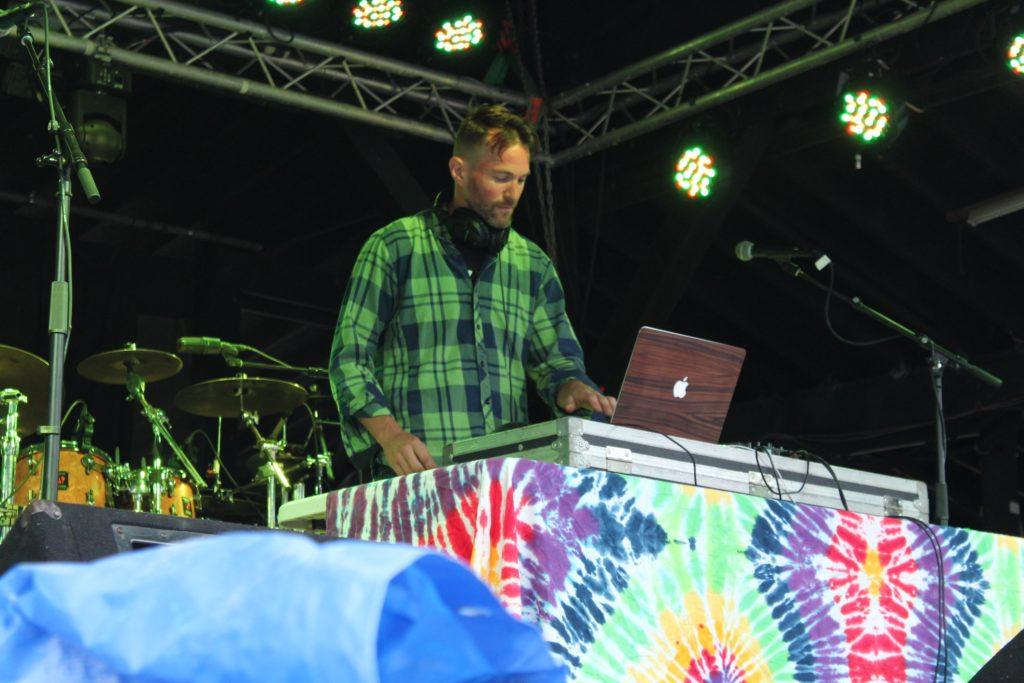 Music started mid-day at 1:30 with Sylock, throwing down a mix of electro-beats, bass and house tunes followed by Philadelphia boys, Grimace Federation. Luke Miller warmed up before his second night performance with his solo act, Luke the Knife. It’s not too often when you hear a DJ do a Talking Heads cover, so I was pleased when a pretty good remix of “Once in a Lifetime” blasted through the beach.

While the rain started sprinkling everyone, Pigeons Playing Ping Pong strode onstage at 6:15 and started off their set with their rhythmic “Upfunk,” keeping the warm spirits going with their tight rendition of “Whoopie.” Busting out a Prince cover of “1999 > Whoopie,” dance moves and all, the boys kept up the silly atmosphere and took the crowd on an adventure with “Time to Ride” before we all realized they were going into “Kiwi,” a song gem in the Flock community. The crowd got psyched for their upcoming new album soon to be released when they invited Lotus members Chuck Morris and Mike Greenfield onstage to sit in and play one of their new songs “Avalanche,” giving us a new funky dose of psychedelic guitar riffs from Schon and extra beats and cowbells from Morris and Greenfield. The beachy vibes prompted their playing of “Julia” as we all danced in the soaked sand, and ended their set with their crazy “Liquid.”

Lotus started off their second night set at 8 p.m. sharp, and started the scene bringing in the funk in “Opo.” They went more into their electronic pulses with “Molluskunk” and “Livingston Storm” before bringing the tempo up in “Sleep When We Are Dead.” Tears fell throughout the crowd as Lotus invited Wes Schwartz from Grimace Federation on stage to sit in on a tribute to Greg Allman in “In Memory of Elizabeth Reed,” definitely a cover that fans will be listening to on repeat for awhile; It was a truly amazing experience that we got to be a part of.

The second set of the night was one of the best sets all weekend. The boys were crisp and clean starting off with “Turquoise” and slipping into their grungy-electro “Bellwether.” Slowing it down a little with their ballad of “The Opus,” the crowd surged with energy and wide sensations as Rempel strummed his guitar to the easy-flowing melody. Luke Miller brought the high energy back with some sick electro-beats as the guys started into “Arupa,” the light displays matching up to Rempel’s spicy guitar riffs into their catchy “Flower Sermon> Bellwether.”

Set One:
Opo > Ra Ako St, Molluskunk, Livingston Storm, Sleep When We Are Dead, In Memory of Elizabeth Reed*, Greet the Mind

The last day of the festival saw the best weather of the whole weekend. The beach was loaded with people basking in the warm sun and many were floating in the quarry on various inflatable animals and tubes. Lotus fans were able to get their merchandise signed by the band members during the day before The Magic Beans got groovy on stage. I saw them perform for the first time, and those guys know how to get down and funky. They even did a late-night set in the woods the last night, blowing us all away with their flawless improv jams that kept us dancing til early morning.

Jerusalem quartet G-Nome Project did-up the stage with their organic electronic mixes and beats, adding in their twist of psychedelic rock to their unique sounds. Most of the crowd stayed for Broccoli Samurai’s 6:15 set and listened to them play some progressive electronic tunes to get the crowd amped for the final night of Lotus. Drummer Cameron Bickley showed off his sick tempos throughout the set, and Pigeons’ Jeremy Schon sat in with the Broccoli boys for a song to add some extra heat to the funk. The crowd erupted as they played the Rick and Morty theme song while broccoli pieces flew through the air to celebrate a great set. 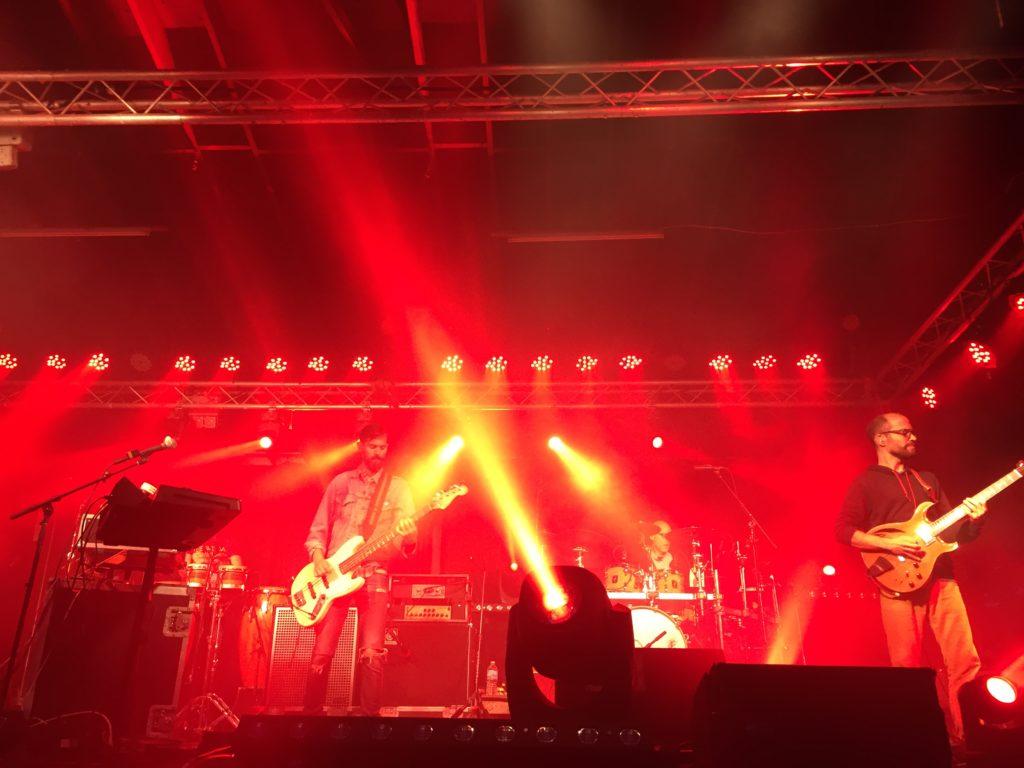 You could feel the energy coursing throughout the festival as Lotus took the stage for the final night. The guys started the night with their edgy “Grayrigg” into a fan-favorite of “Neon Tubes > Soma > Neon Tubes.” The harmonious tones in “Soma” was the perfect middle to that funky tube sandwich, before they jumped into a new tune “Bug Love.” The recurrent tones in “Nematode” chilled us all out, and continued the easy-going vibes by closing out their first set with “Disappear in a Blood-Red Sky.”

The guys started their last set of the weekend with “Lucid Awakening” with Jesse Miller’s sample-heavy sounds. After the bass-heavy “Blacklight Sunflare,” the crowd erupted as Chuck Morris started the beat to “Drunken Giraffe,” a song that made its first reappearance since 2007. The funky “Wax” got the crowd dancing, and the always chilled and poised Mike Rempel broke his usual persona when his equipment was malfunctioning, and threw up double rock hand horns to the crowd before restarting their excellent rendering of Tame Impala’s “Elephant.” Setting the mood back to a trance, the crowd rocked back and forth to “In the Bliss,” and ending their last set with “128 > modular jam > 128.”

Evan and Kristina Kelley, owners of the campgrounds, came onstage and talked to the crowd to celebrate the 10th anniversary of Summerdance and 20 years of Nelson Ledges. The music festival has changed quite a bit throughout the decade, and Lotus played three nights for the first time ever and brought in a family of people to celebrate the beachy-woods venue anniversary.

This year was the first year the festival helped raise money for the town of Nelson and held a food drive raffle for families in need around the area. Winners of the raffle were called from the stage, and Summerdance will continue raising money each year for people in Portage County.
Lotus reappeared onstage and finished off the weekend with their tranquil “Colorado” before ending everything with their post-rock “Behind Midwest Storefronts” leaving us all in a state of admiration and not wanting the weekend to end. This year’s Summerdance was ultimately the best one yet, highlighting Lotus for three nights at one of the best venues in Ohio. Nelson Ledges continues to be a favorite secluded setting for people around the country to come together in harmony for weekends of camping and great music. Lotus family will continue to bring their loving, high-end energy each year to gather together for the love of jam vibes.

Summer Send Off Coming to Kent 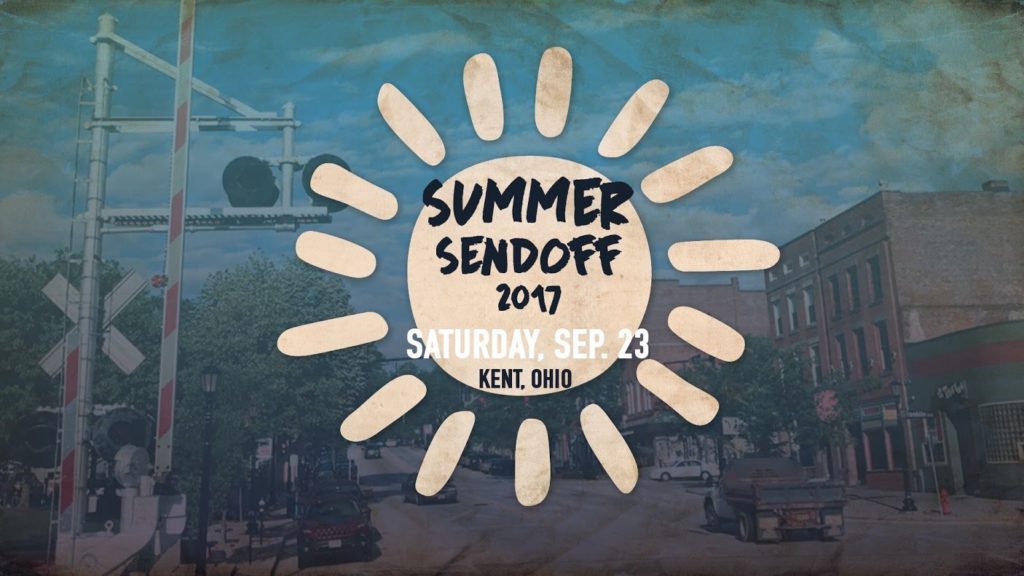 BSR Burr Beats #1 – Back to School 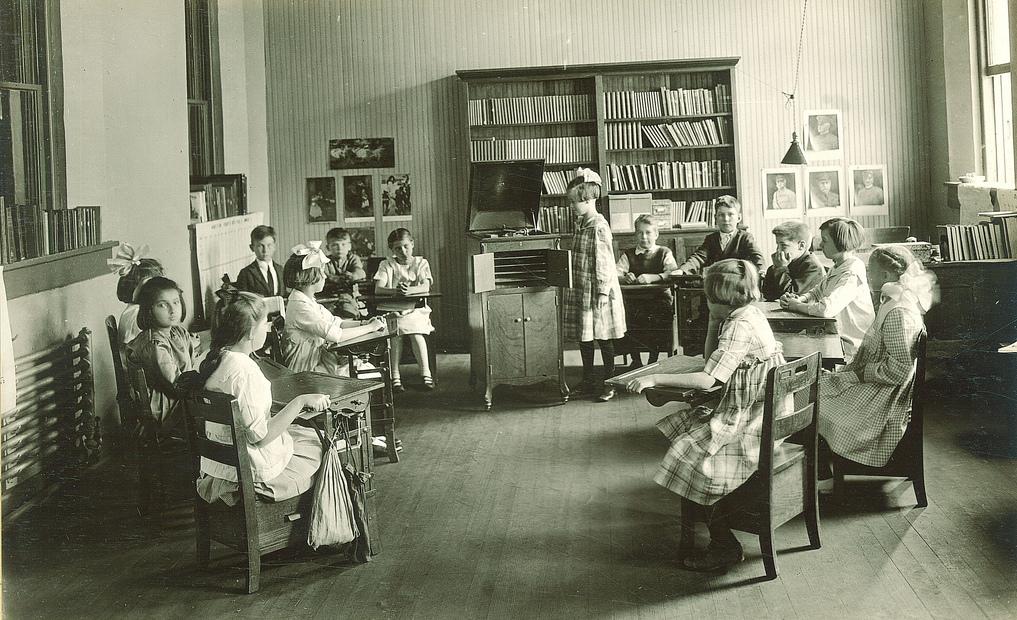