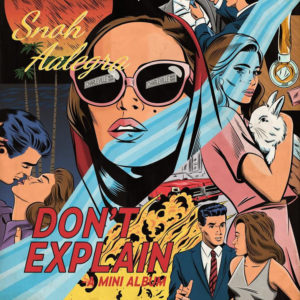 Female soul and jazz vocalists are truly one of a kind; a special kind of beauty is sung painting canvases of love, loss and self discovery. Legendary jazz vocalist Amy Winehouse poured herself into her music, delivering a raw and true portrayal of herself. After listening to Snoh Aalegra’s Don’t Explain, Winehouse’s unique sound is reminiscent within this nine track EP.

Aalegra is relatively new to the music scene, but she has worked with Vince Staples, being featured on his single “Señorita” alongside Future. She’s also collaborated with Common on the track “Bad Things.” “Emotional,” her first and major solo success was followed by a six track EP, There Will Be Sunshine.

On Don’t Explain, Aalegra welcomes her listeners with silk, layered vocals while being surrounded with strong production from the likes of No I.D and Christian Rich. Delivering thick jazz and R&B notes mixed with guitar, drums, piano, horns and strings. While features are few, they do include experimental jazz/funk/R&B artist James Fauntelroy and guitarist John Mayer. Aalegra tells Trent Clark at Hiphopdx.com that the base for this EP is on “Cinematic Soul,” she adds that the title, Don’t Explain, means that “There is no explanation for my music, my fans just press play and get me.”

The single released before the EP dropped is titled “Under the Influence.” Aalegra is accompanied by contemporary jazz guitarist John Mayer as she belts about the struggles of herself and her lover trying to change for the sake of their relationship. While both are having their differences, the thought of losing each other scares them saying, “We are both just a little afraid/And I forget I want to fight with this/Cause when we are alone/I’m under the influence of you.”

In the track following the intro, “In Your River,” Aalegra is in love with someone who is infatuated with another lover. She compares her loss and confusion to being lost in this person’s river. The string heavy and horn pounding track follows the theme of the title as the listener flows downstream with the song from start to finish.

“Don’t Explain,” details the reunion of her lover and pouring out the importance of enduring love in a relationship, despite this person’s actions, cheating on her. Aalegra is so enamored with this love, she writes: “Hush now/don’t explain/You’re mine, young and pained/My life, yours love/Don’t explain.” The track is the definition of loving unconditionally.

All together, the album explores themes of love that is triumphant, or love that is heartbreaking. It’s very personal and the listener can attune to what is being sung by Aalegra and immediately relate to her experiences. That is the beauty of soul and jazz. While Aalegra has a diverse musical background, her strengths are drawn out in this setting which is the basis of the album. So much potential is exuded in this EP making the grander project all the more harder to wait for.

Amy would be proud.